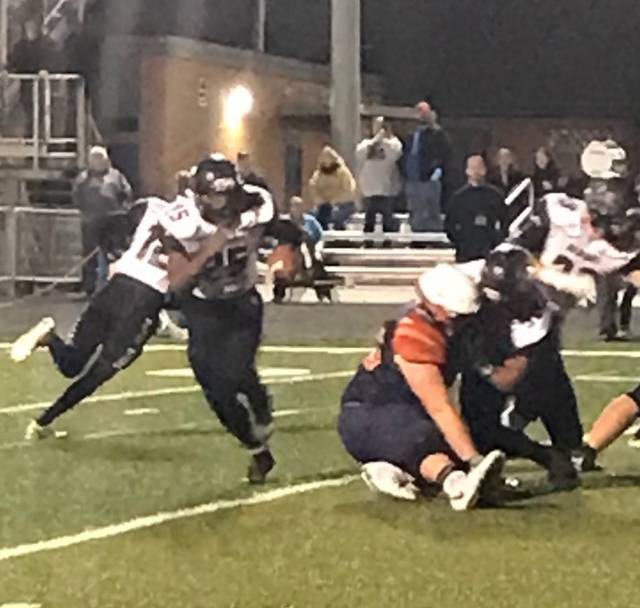 Harlan County running back Quintin Mickens headed for the end zone during the 5A state semifinals. Mickens scored a touchdown in the Bears’ 27-20 loss.

BEREA — A season that will be remembered for its extreme highs and lows, with a 1-4 start followed by a surprising run to the Region 4 title with five straight wins, ended in agonizing fashion Friday for the Harlan County Black Bears with a 27-20 loss to Region 3 champ Madison Southern.

Harlan County (8-6) grabbed the momentum with 10 unanswered points in the third quarter, then had the ball in the fourth quarter with a chance to put the game away. Madison Southern (11-3) rallied behind senior fullback Carter Smith, who scored on touchdown runs of 1 and 27 yards in the fourth quarter and finished with 151 yards and three touchdowns on 20 carries.

After the tying touchdown, Harlan County recovered a fumble in Madison Southern territory and drove inside the Eagles’ 20 before returning the favor with a fumble that set up the Eagles’ winning drive. The fumble call drew complaints from the HCHS sideline as officials discussed the play before giving the ball to Madison Southern.

“There will always be three or four plays you can look back on in a close game like this, but at this point all I can say is how proud I am of this team,” Harlan County coach Eddie Creech said. “They have given everything they had, not just this year but over the past three years and laid the foundation for these juniors, sophomores and freshmen.”

The Bears earned a spot in the state semifinals by winning consecutive games on the road over Pulaski County, North Laurel and Pulaski Southwestern to capture the school’s third Region 4 title. Madison Southern won its first regional title last week and now advances to the 5A state finals for the first time, taking on Covington Catholic on Saturday at 8 p.m. at Kroger Field in Lexington.

After stopping the Eagles on downs to open the game, Harlan County marched from its own 23 to the Madison Southern 23 before Marcus Kelly hit a 40-yard field goal with 4:36 to play in the opening period. Tyrese Simmons had the big play in the drive with a 33-yard catch on a third-and-13 play. Devon Rodrigues picked up 15 yards on a run to put the Bears in field goal territory.

Madison Southern answered with a 12-play, 80-yard drive that featured a couple of nice runs by quarterback Landen Stacy and Smith. Stacy went in from the 7 on the second play of the second quarter. Baylor Willis’ extra point gave the Eagles a 7-3 lead.

Harlan County came back with an 11-play, 69-yard drive that featured a steady dose of Mickens out of the spread set. Rodrigues had a catch across the middle for 13 yards to the Southern 3, then Mickens twisted and turned his way into the end zone on the next play. Kelly’s extra point put the Bears up 10-7 with 5:35 left in the first half.

Madison Southern followed with another 80-yard drive after Kelly’s second kickoff into the end zone. Stacy a couple of big plays in the march, including a pass to Smith as he cooly picked up a bad snap and turned it into a first down. Smith went the final 2 yards for a touchdown with 1:36 left in the first half. After a penalty on the Bears, Madison Southern went for two and Nathaniel Eads was stopped short.

After an exchange of fourth-down stops, the Bears had a chance to take the lead after driving to the Southern 2 before a procedure penalty on fourth-and-one prompted Creech to go for a field and Kelly pulled HCHS even when he hit from 25 yards with 2:05 left in the third quarter.

Two big plays by two Harlan County seniors gave the momentum back to the Bears. Rodrigues appeared beat on a deep pass by Stacy but accelerated and picked off the ball off on the Bears’ 36. Simmons, out of the wildcat offense, followed a block by Rodrigues around the outside for a 64-yard touchdown run on the next play. Kelly’s extra point put HCHS ahead 20-13 with 1:16 to play in the third period.

After forcing a punt, the Bears had a chance to all but put the game away but could not move the ball. Southern answered with an 11-play, 64-yard drive to pull even when Smith went in from the 1 on fourth down. Wills’ extra point tied the game at 20 with 3:21 to play.

Harlan County was forced to punt but got the ball back on a fumble at the Madison Southern 44 with 1:59 to play.

Simmons picked up 14 yards on a catch, then Mickens went to the Eagles’ 17 before officials ruled he fumbled before he was down. A pass interference penalty and a couple of long runs by Smith, the last covering 27 yards for a touchdown with 45.6 seconds left put the Eagles on top. 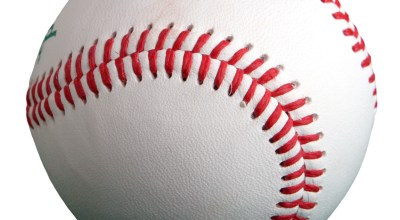