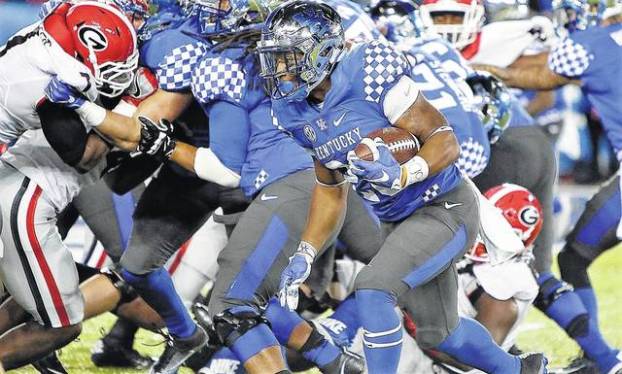 Kentucky running back Benny Snell topped the 1,000-yard mark in rushing for the second time in the Wildcats’ win last week at Vanderbilt.

LEXINGTON (AP) — Benny Snell has carried the football a lot for Kentucky this season and wonders if he’s done enough.

The Wildcat sophomore is on a tear and notched several program milestones.

Snell’s 116 yards rushing on 17 carries in a 44-21 victory at Vanderbilt pushed him over 1,000 for the second consecutive season, making him the first player in school history to do so. His three touchdowns also gave him a school-record 28 in his career, breaking the old mark of 26 shared by Sonny Collins and Moe Williams.

He has topped 100 yards rushing in each of the past three games, demonstrating more intensity and durability than his breakout freshman season.

“I’m finding the little holes, making cuts that I probably wouldn’t have made last year,” said Snell, the Southeastern Conference’s No. 2 rusher with 1,013 yards. “Just being a smarter runner.”

Snell’s growth has helped Kentucky (7-3, 4-3) become bowl eligible for a second consecutive season. Most importantly, he’s helping the Wildcats’ offense click as they enter the season’s biggest test Saturday at No. 7 Georgia (9-1, 6-1).

The Bulldogs are eager to rebound from last week’s 40-17 loss at No. 6 Auburn , which rushed for most of its 237 yards out of the wildcat scheme. Snell has thrived on the direct-snap formation — he rushed for 114 yards and two TDs against Georgia in last season’s 27-24 loss — and appears to have found another gear with 472 yards and nine TDs the past three games.

“He’s a little more patient and his technique has been phenomenal the last three weeks,” Gran said. “From his alignment to his first step, just everything. He’s always been physical and runs with great passion.

“What he’s done is a great job of fixing the little things. … Where you align, patience on what we’re doing schematically, he’s done that.”

With a SEC-best 205 carries, Snell is proving he can carry a heavy workload.

He showed that two weeks ago against Mississippi with nine carries for 77 yards on a late go-ahead TD drive. The possession included consecutive runs for 21 and 13 yards that left him temporarily winded before he quickly recovered to rush three more times, including the 1-yard score. Snell finished with 176 yards on 28 carries, just four fewer attempts than his season high at South Carolina.

“I feel like I’m the most durable back in the SEC,” he said. “I feel like my body can take a whole bunch of carries and other backs can’t do that.”

Even so, Kentucky coaches are involving other backs to keep the 5-foot-11, 223-pound Snell fresh. Speedy junior Sihiem King has shown promise with 63 carries for 307 yards, including 15 attempts for 69 yards and two TDs at Vanderbilt. Senior quarterback Stephen Johnson hasn’t hesitated to run either, gaining 348 yards on 79 carries.

But the Wildcats obviously depend on Snell to start the ground game. After teaming with Stanley “Boom” Williams to form Kentucky’s first 1,000-yard rushing tandem last season, Snell has taken the lead role and become Kentucky’s ninth back with 2,000 career yards. He needs just two yards to pass Artose Pinner (1999-2002) for eighth place on the program’s all-time list.

The added responsibility has taught Snell that yards and TDs don’t have to come all at once — although his current run shows he can do it.

“I’m just trying to be a student of the game.”

Bears one win from a regional title