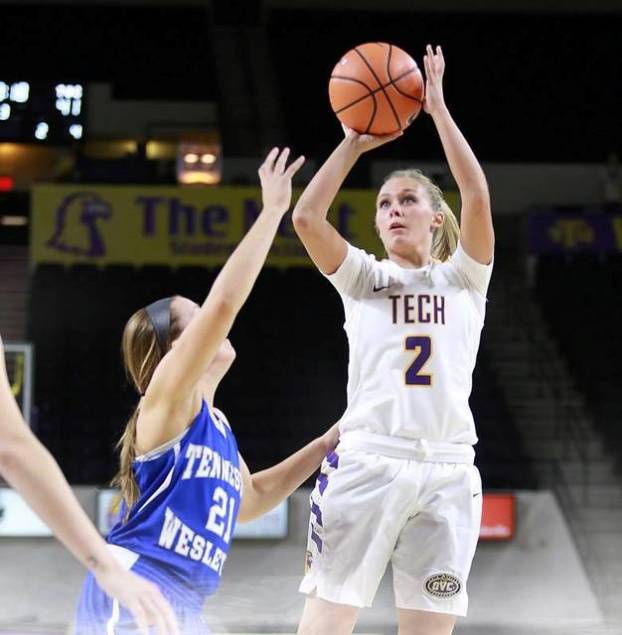 COOKEVILLE, Tenn. – Kesha Brady and Jordan Brock accomplished something Friday night that hadn’t been done by a pair of Tennessee Tech players in nearly 15 years.

The two helped the Golden Eagles defeat Tennessee Wesleyan 84-66 in Tech’s season opener thanks to some standout offensive numbers. Brady and Brock, two freshmen making their debuts in purple and gold, accounted for 41 of Tech’s 84 points. Brady led the team with 21 points, helping her earn the title of First National Bank of Tennessee-Special Olympics Player of the Game, and Brock followed close behind with 20.

Nov. 22, 2002 was the last time two Tech freshmen each scored 20 points or more in a debut. Two local products, Jenna Baltimore of Livingston and Courtney McFarlin of Mount Juliet, put up 21 and 23 points, respectively, in a 74-56 win over East Tennessee State.

“That’s exciting,” said head coach Kim Rosamond of Brady and Brock’s offensive output. “We’ve got a lot of newcomers that are stepping up, and tonight, it was Kesha and Jordan. Tuesday night, it may be a different crew.”

Tech’s offense tonight, bolstered by starters Akia Harris’ and Yaktavia “Shug” Hickson’s double-digit scoring and the team’s 44 percent 3-point shooting, fortunately compensated for its defensive struggles. The Golden Eagles gave up 66 points to the Bulldogs (0-3) when they allowed just 41 in a 13-point win last season.

“Every timeout, we were just talking about how we could get better defensively,” said Rosamond.

She did praise Harris’, Kentoria Alexander’s (who returned to the floor tonight from a sprained ankle injury she suffered during preseason practice) and Brock’s defensive efforts and challenged the rest of the team to improve.

“Forcing 31 turnovers is solid, but I’m not pleased at all that we gave up 66 points,” Rosamond said. “We should be a good defensive basketball team, and we will be. It’s just going to take some work and some building of trust.”

Tech also was admittedly lacking from the free throw line, knocking down just over 48 percent of its free throws. Brady and Brock combined for 11 of their 17 free throw attempts, while Harris and Asia Harper added one each.

“Defense and rebounding is what is going to win you games, and then getting to the free throw line and knocking down free throws,” said Rosamond. “We were a little deficient in all three of those areas tonight, and we’ve got to get a lot better quickly.”

Other offensive notables from tonight include:

Cats pull away in 2nd half for win over Vandy

NASHVILLE, Tenn. (AP) — With the kind of numbers Benny Snell is putting up, it’s hard to believe he’s a... read more