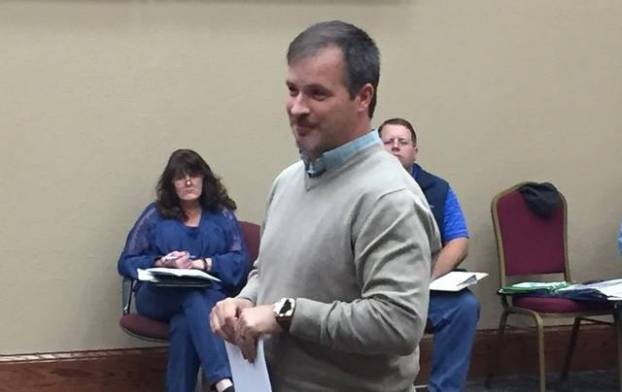 Scott Noel of N3D presents his findings concerning the roof at the Harlan County Detention Center during a recent Harlan Fiscal Court meeting.

The Harlan Fiscal Court voted to advertise for bids to replace the roof on the Harlan County Detention Center during a recent meeting.

Harlan County Judge-Executive Dan Mosley asked Scott Noel of N3D, who has been working with the county on a design for the project, the speak to the magistrates about the job.

“We do have the drawings and specifications ready to advertise for bids,” Noel said. “We had a roofer come down and do some samples, and although the original drawings are detailed very nicely…it really wasn’t constructed the way it was supposed to be.”

According to Noel, the improper construction a large part of the reason the roof has leaked almost since the day it was finished.

“With that being said, we were first talking about an overlay retrofitted roof to cover what was there,” Noel said.

Noel pointed out that since the roof was not constructed the way it was designed, the best option would be more extensive.

“It’s our professional recommendation that we tear off (the old roof) and build new,” Noel said. “Because, in the event something would fail below the new roof, we would just be compounding the problem.”

Noel explained the bid documents would be set up so a base bid would be for a new metal roof, but an alternate bid for a PVC membrane roof could also be accepted.

Noel added the water damage form the leaking roof has also caused some additional problems which will need to be addressed.

“We have some of the worst locations taken care of in the base bid plans, but we’re also accepting unit price bids along with the regular bid,” Noel said. “That way, if there in there working and happen to stumble upon some areas that are in dire need, we can communicate and determine whether it needs to be fixed now or if it can be fixed as a maintenance item later.”

Mosley asked about warranties for the work.

“We are designing in a 20-year non-prorated warranty,” Noel explained. “So, for the next 20 years if there’s a leak you call the roofing manufacturer and they fix it.”

Noel also clarified a liquidated damage clause to be included.

The bid contract would also require any contractor bidding to have at least 15 years’ experience with the types of roof they would be installing.

“We certainly value the security blanket approach on this project after what we’ve dealt with concerning that leaky roof for years,” Mosley said.

After some further discussion, the court passed a motion to advertise for bids for a roof replacement at the Harlan County Detention Center.

The Harlan County Arts Council has announced that while its annual Halloween celebration — Pumpkin Square — will not take... read more