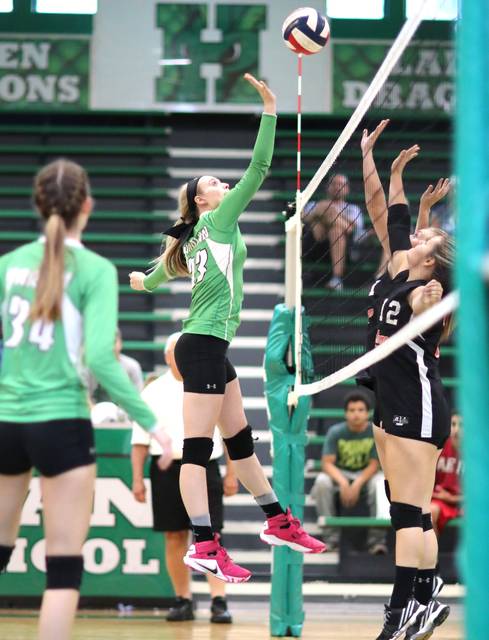 Harlan’s Brandi Haywood went to the net for a point in the Lady Dragons’ three-set victory Thursday over Lynn Camp. Harlan will enter next week’s 52nd District Tournament at Bell County as the No. 1 seed.

Harlan bounced back from a recent losing streak and closed the season strong by winning three of their last four matches, including a 25-4, 25-8 and 25-20 rout of visiting Lynn Camp on Thursday.

“We have played some very tough competition this season and I hope it pays off in tournament play,” Harlan coach Tara Posey said. “This team has come leaps and bounds this season, and I feel like we can make waves in the regional tournament as long as we keep our focus through district. We are the No. 1 seed coming in, but records mean nothing at this time of the year. Monday night we are all back to 0-0.”

Saylor also led the Lady Dragons in assists with six. Simpson, Cozart and Middleton added three each. Bianchi had one.