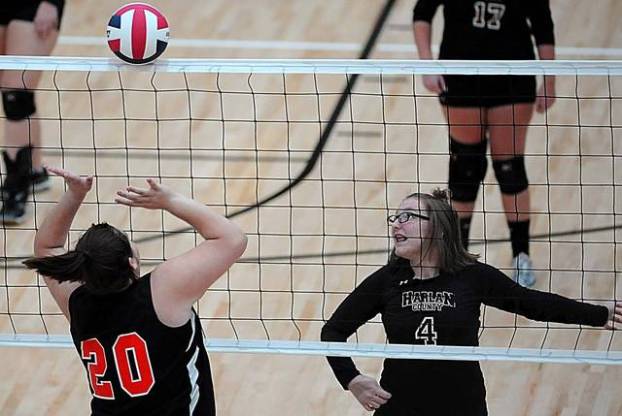 Harlan County’s Haley Scearse pushed the ball over the net in the Lady Bears’ two-set victory over visiting Lynn Camp on Monday. It was the eighth straight victory for Harlan County, which closes its regular-season schedule on Tuesday at Lynn Camp.

The Harlan County Lady Bears started the 2017 season on a hot streak and it looks like they are going to end the regular season much the same way. Harlan County celebrated Senior Night on Monday with a 25-10, 25-12 win over visiting Lynn Camp, extending its win streak to eight and improving to 14-5 overall.

“We served the ball well tonight, but the girls weren’t very focused and I am assuming it was because of Senior Night,” said HCHS coach Stacy Noe. “We have a great group of seniors though as well as the younger players and they realized it was the last time they would be playing volleyball on that court, so we started all five and left them in the entire game.”

“Those two impressed me tonight because they took a back seat to the seniors and cheered them on the entire game,” Noe said. “This makes our eighth win in a row and we are excited about our opportunity with Knox Central tomorrow night. I know we will have to be ready to compete with them.”

LEXINGTON (KT) — Mark Stoops knows his team has some “work to do” when the Wildcats return to Southeastern Conference... read more