Dragons’ ground game too much for Jays 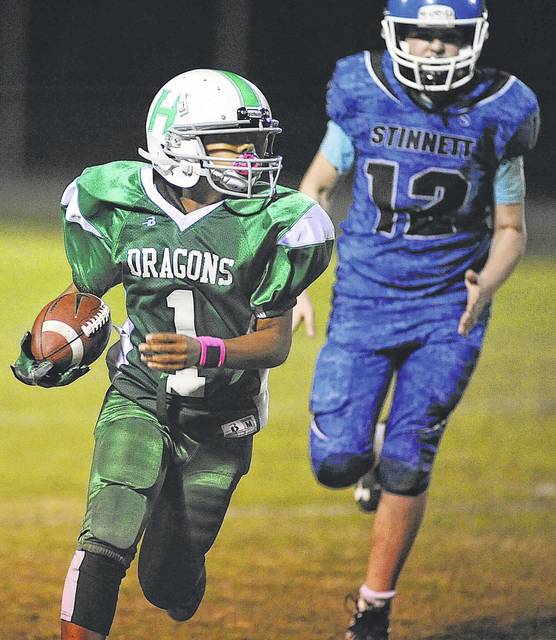 Donovan Montanaro found an opening around the Stinnett defense in middle school football action Tuesday. The Green Dragons rolled to a 34-0 victory.

Harlan put together two dominating performances Tuesday to sweep a middle school football doubleheader over visiting Stinnett, winning 34-0 in the seventh- and eighth-grade game and 30-0 in fifth- and sixth-grade action.

The Dragons gained 272 yards rushing in the seventh- and eighth-grade game, led by Luke Carr with 109 yards and two touchdowns on 10 carries. Tristan West added 48 yards on three carries, with one touchdown. Cade Middleton ran for 32 yards on five carries and completed two of seven passes for 46 yards, with one touchdown and a pair of two-point conversions. Jared Eldridge had both receptions.

The Harlan defense was led by John Lewis with six tackles and Ethan Shepherd with five.

“Our defense did a good job of pursuing the ball and gang tackling,” Harlan coach Chris Thompson said. “I’m really proud of this team. We only have 15 players and two of those were out tonight, so it’s tough when you have to have kids play the whole game and not come off the field. I am especially proud of the linemen. We have moved people around to adjust to what we have. I think they did good considering we a made major changes at center and tackle right before the game tonight and they both responded well. I think they are excited to get to play after missing a couple games because of the rain.”

The Harlan defense was led by Will Cassim and Trenton Childers with four tackles each. Dylan Cox and Baylor Varner added three tackles each.

“We looked good on both sides of the ball,” Thompson said. “Our defense showed some aggression tonight and the offensive line blew people off the ball.”

Harlan will play at Lynn Camp on Saturday.

No details were provided by either team.

The Redskins won 26-6 in the fifth- and sixth-grade game as Dionta Long passed for three touchdowns, ran for another and added a pair of two-point conversions.

Evarts’ Austin Tindell picked off a pass in the closing seconds of the half to stop another Cumberland drive.

Long ran 15 yards for a touchdown with 3:06 left in the third quarter.

Long teamed with Darius Akal for a 75-yard touchdown with 2:44 left in the final period.

The Redskins improved to 4-1 with the victory.