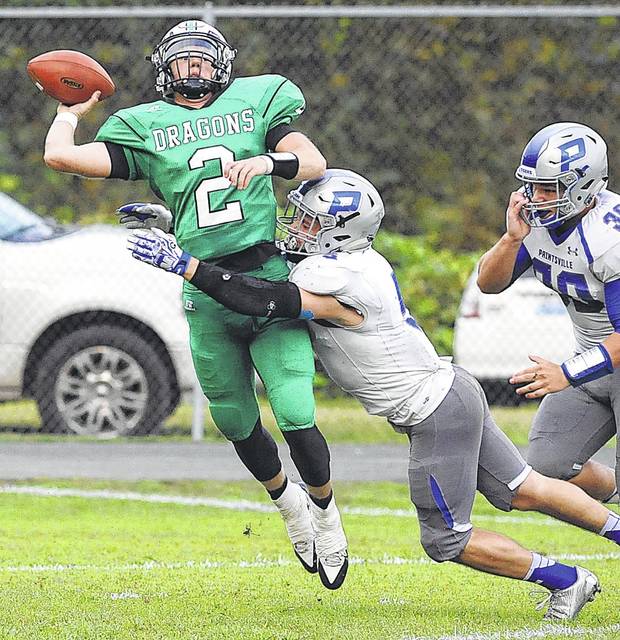 Harlan quarterback Kilian Ledford released a pass while under pressure from the Paintsville defense in action earlier this season. Ledford and the Dragons will play at Magoffin County on Friday.

Anyone who wants to watch either of the county football teams on Friday will have to travel. Harlan (0-4) will be heading east 118 miles to Magoffin County. Harlan County (1-3) goes west 135 miles to Wayne County.

Harlan rallied last week in a 14-12 loss at Middlesboro and had a chance to tie in the final minute before Kendal Brock was stopped short on a two-point conversion attempt after Kilian Ledford had scored a touchdown on an 8-yard run.

“When you’re 0-3 and down 14-0 it’s easy to give up, but our kids didn’t. We fought and played hard. I’m really proud of them,” Harlan coach John Luttrell said. “We still made a lot of mistakes we have to correct. We stepped back a little defensively, but that’s a tough offense to prepare for with the veer. We have to regroup and keep working and focus on the next opponent.”

Magoffin County (2-2) has won its last two games, 36-24 over East Ridge and 18-16 over Betsy Layne, after opening the season with losses to East Carter and Lawrence County. The Hornets are led by Ryan Mullins, who has passed for 547 yards and leads the team in rushing with 240 yards. Matthew Watkins and Brady Whitaker, both juniors, lead in receptions with 15 and 13, respectively. Mullins also leads the team in tackles with 29.

“(Mullins) is a big kid, about 6-4, with a really good arm,” Luttrell said. “He can run and throw. He has a couple of decent kids out there to throw it to.”

Luttrell said the trip to Salyersville is the biggest concern for him going into the game.

“First of all, we have to get over the travel, three hours on a bus,” he said. “I think we match up with them pretty well, but we have to establish our running game right away. We did a little better job against Middlesboro but we’re not where we should be. We also need to get a pass rush and stop their run.”

The Dragons are almost back to full strength after having several players out earlier due to injuries. Junior running back/receiver Caleb Adkins is the only starter not expected to play as he recovers from a shoulder injury.

Harlan County isn’t nearly as fortunate with injuries at this point in the season as they prepare for one of the state’s top 4A teams. The Bears played without quarterback Jacob Branson, running back Quinten Mickens, receiver Tyrese Simmons and tackle Andrew Baker last week, along with linemen Jared Creech and Kobe Burkhart. Senior running backs Paul Stapleton and Christian Hall, both starters on defense, could join the injury list this week, along with sophomore lineman Noah Saylor. Coach Eddie Creech hopes to have just about everyone back for the following week when HCHS opens its district schedule at North Laurel.

With all the injuries, the Bears’ troubles are compounded by facing perhaps the best team on their schedule this week. Wayne County (3-1) was the 3A state runner-up in 2014, falling 3-0 to Belfry, and lost in the 4A state semifinals the past two years, winning consecutive regional championships.

“They have a solid football program, currently ranked second in the state. They play really hard at all 11 positions on both sides of the ball. That is what impresses me most,” Harlan County coach Eddie Creech said.

The Bears have topped the 100-yard mark in penalties each of the last three weeks, an area Creech says must improve. Harlan County has also struggled with turnovers, giving up two touchdowns on interceptions in last week’s loss to Knox Central, along with one on a fumble and another on a blocked punt.

“We’ve put an emphasis this week on minimizing penalties,” he said. “Our defense has played pretty good, but until our offense stops shooting themselves in the foot it will be tough. We have to put points on the boards and that starts with not turning it over and not getting penalized so much.”

The Cardinals are led by one of the state’s top quarterbacks in 6-2 senior Lorenzo Linsey, who has passed for 883 yards through four games.

“He’s one of the best quarterbacks I’ve seen with his poise in the pocket and his ability to run and throw,” Creech said. “He’s very smooth in his mechanics and has a lot of experience.”

Aubrey Weaver, a junior, leads Wayne in receptions with 23 for 320 yards. German Ruiz, a senior, leads in rushing with 309 yards. Senior linebacker Clay Shelton has a team-high 39 tackles.

Harlan County opened the season with an impressive win over Ashland before injuries, turnovers and mistakes began to pile up in losses the past three weeks to Hazard, Tates Creek and Knox Central.