Lady Dragons fall in All A finals 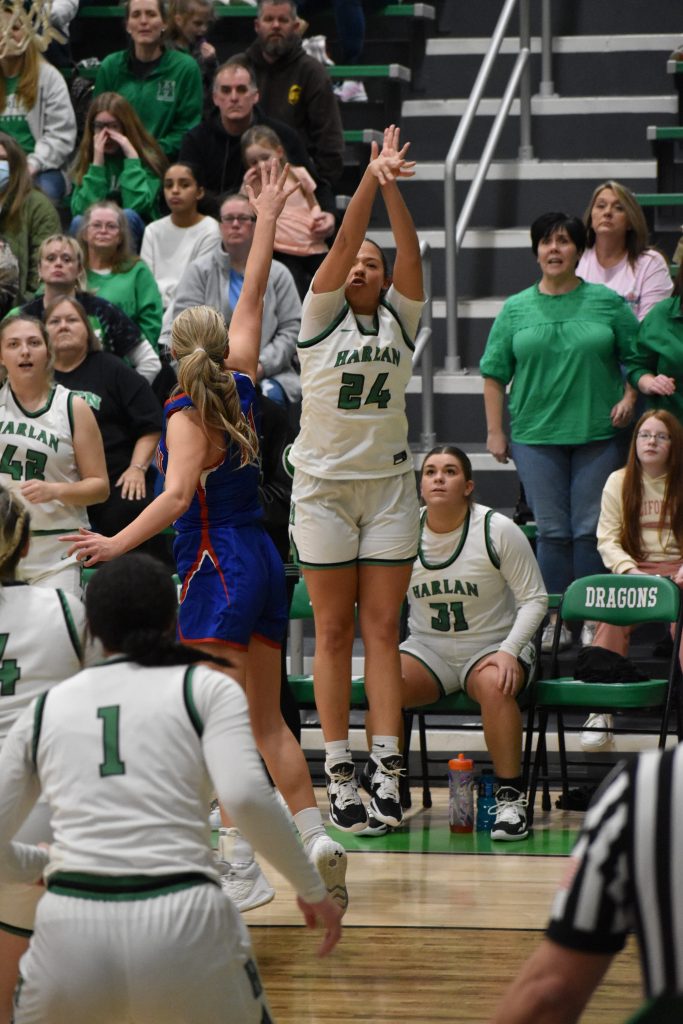 Harlan's Aymanni Wynn launches a shot against Jackson City in the 13th Region All A finals. (Photo by Christin Freeman)

The Jackson County size and inside scoring by Kenady Ward was nearly too much for the Harlan Lady Dragons in the 13th Region All A Classic finals at Harlan.

The Lady Generals built a 9-point lead midway through the third quarter before Harlan fought back, before falling 69-63 late.

Jackson County’s win advanced the Lady Generals to the state tournament at the end of January.

Trailing 40-29 with 3:30 remaining in the third quarter, Harlan got three-point plays by Kylie Noe and Emma Owens to cut the deficit to six, 48-42, at the end of the period.

Aymanni Wynn completed a three-point play, and Noe hit one of two free throws to make it a two-point contest with two minutes left to play.

Both teams traded a basket before Kylee Shannon hit one of two free throws as Jackson County led 64-61.

Harlan came down the court, and Noe was open inside and hit a jumper to make it a one-point deficit.

Jackson County held the Lady Dragons scoreless in the final minute. Madison Curry and Jenna Creech each hit two free throws as the Lady Generals escaped with the win.

The 6-9 Lady Dragons lost 44-27 to Pineville on Tuesday. Harlan will host Bell County on Friday in doubleheader action and Clay County on Saturday.

Wynn and Noe 48 points as Harlan rolled to a 68-30 victory over Barbourville.

Harlan jumped out to a 27-8 lead in the first quarter behind Wynn’s 12 points, and Noe’s 10-point scoring effort, and they never looked back.

Wynn and Owens each scored eight points apiece in the second quarter, while Jones added seven points, pushing Harlan’s advantage to 50-17 at halftime. Noe scored 10 points in the third quarter while exempting the Lady Green Dragons’ edge to 68-25.

Harlan managed to take advantage of 30 Lady Jacket turnovers as the Lady Dragons advanced to the semifinals with a 54-23 victory over Middlesboro on Monday.

“I think it’s an important tournament for any All A school, and our goal was to win three games. This is one of them,” said Harlan coach Tiffany Hamm-Rowe. “Our goal is to win this tournament.”

Harlan took a 7-5 lead when Middlesboro coach Sally Adams called a timeout. Rowe used the opportunity to encourage her team to pick up its intensity on the defensive end.

“I was glad she called it because I didn’t want to burn one that early,” said Rowe. “I thought we might come out a little rusty. We just wanted to continue to play defense while the offense started a little rough.”

Wynn powered the balanced Harlan attack with 15 points and six rebounds. Leah Davis and Noe each scored 12 points. Emma Owens finished with 11. Peyshaunce Wynn and Annie Hoskins each had two.

Up 19-8 after one quarter, Harlan outscored Middlesboro 15-2 in the second quarter. Noe hit all three of her shots and Davis connected on two of three as the Lady Dragons’ lead grew to 34-10 by halftime.

The Lady Dragons opened the third quarter with a 14-3 run, capped by two baskets from Wynn, to start a running clock with 2:55 left in the period. Harlan led 52-16 going into the fourth quarter as reserves for both sides finished the game.