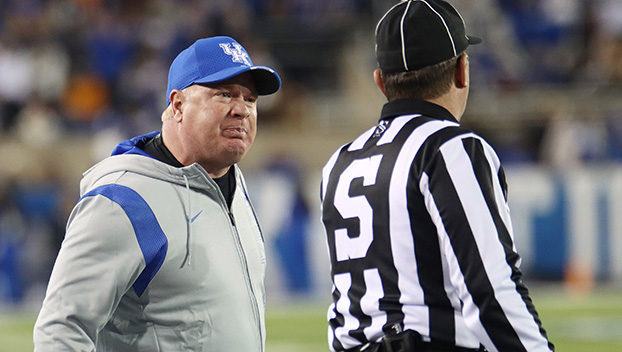 Kentucky football coach Mark Stoops has made the first coaching move of the off-season.

Stoops fired running backs, and co-special teams coordinator John Settle on Monday in what could be the first of several coaching moves. Settle was hired in 2021 to replace Eddie Gran. The firing was announced by WLEX-TV and BBN Tonight.

Stoops said after the Louisville win, the offense was frustrating at times and failed to utilize the same consistency the Wildcats enjoyed during a 10-win season last year.

“You heard me talk about through the ups and downs, it’s our job to put them in a position to be successful,” Stoops said. “We’ve done that at times and at times, we haven’t. You put it all together, and you get a group of men that play that hard and put them in a position like that, you like to see that result right there.”

The Wildcats (7-5) closed out the regular season with a 26-13 win over Louisville that ended a two-game losing streak. Kentucky awaits its postseason destination, which will be determined following this weekend’s conference championship games.

Following the win over the Cardinals, Kentucky freshman defensive lineman Deone Walker was named SEC Co-Defensive Player of the Week. Walker collected six tackles, and was in on a sack and a tackle for a loss.

The SEC-Big 12 Challenge has run its course and will be replaced by another event starting next season.

The SEC and ACC have forged an agreement that will replace the SEC-Big 12 Challenge held on the last weekend in January. Kentucky will host Kansas on Jan. 29 in the finale of the yearly series. The challenge will be carried on the ESPN networks.

“We are excited women’s and men’s basketball student-athletes will have the opportunity to compete with their colleagues from the ACC as we initiate a new Basketball Challenge experience,” said SEC Commissioner Greg Sankey. “I appreciate the collaboration of Jim Phillips and the ACC members, along with our broadcast partner ESPN, to make possible the SEC/ACC Basketball Challenge which will provide our fans with exciting basketball early in the 2023-24 season. I also thank the Big 12 for the many great challenge games we experienced together in past years.”

Kentucky and Louisville will be part of the challenge that will begin with 28 teams and expand to 30 during the 2025-26 season.

The Wildcats slipped from No. 15 to 18th in this week’s Associated Press Top 25 poll released on Monday. Kentucky hosts Bellarmine in a 7 p.m. tipoff Tuesday.