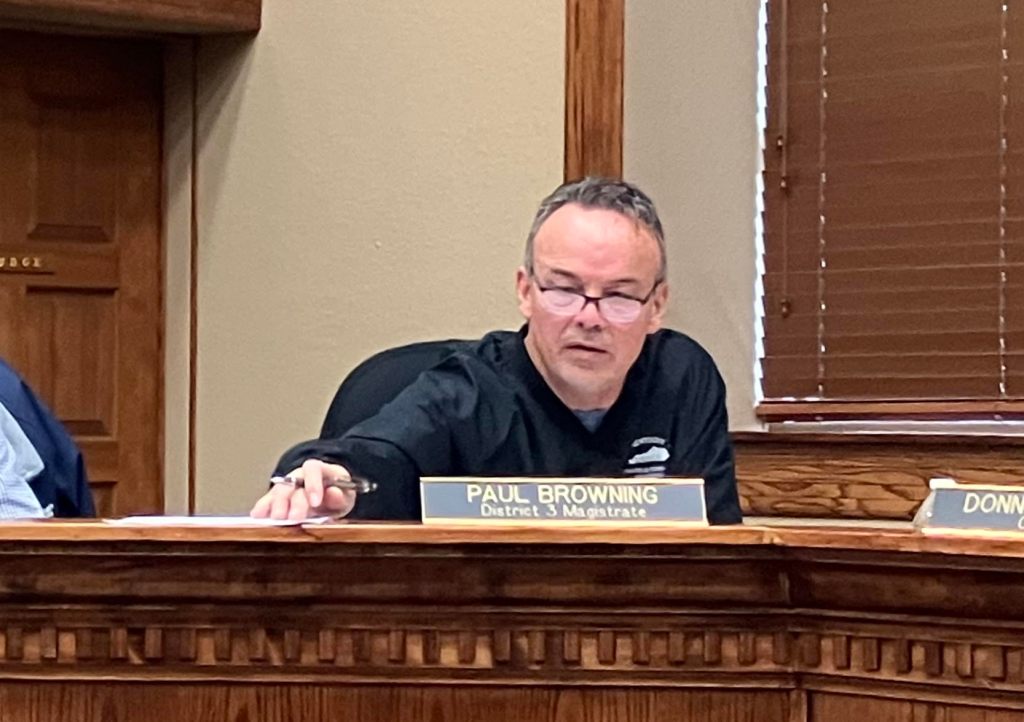 Magistrate Paul Browning discusses internet speeds in parts of his district during a recent meeting of the Harlan County Fiscal Court. (Photo by Joe Asher)

The Harlan County Fiscal Court acknowledged a proposal for broadband services from Eastern Telephone and Technologies during the court’s regular meeting for November.

Harlan County Judge-Executive Dan Mosley talked about the proposal midway through the meeting.

“We have received a broadband proposal related to our ARC Power Grant,” Mosley told the magistrates. “The proposal we have received is from Eastern Telephone and Technologies. That is the only proposal that was received.”

Mosley said the proposal is under review by the Center for Rural Development.

“This is related to our grant that we received – approximately $2 million – to extend broadband to (remote) communities,” Mosley said.

“There is no action necessary today, other than to reflect that we have received the proposal,” Mosley said.

“I appreciate you bringing that up, because it gives me an opportunity to mention that we’ve also discussed with the Center for Rural Development a smaller what they call ‘move the needle’ project,” Mosley said. “We’ve looked at an area along US 421 from the Leslie County line to Green Hills School, and then also an area in your district.”

Browning pointed out that residents who work from home require improved internet speed. “I’ve visited some people, particularly across Pine Mountain, where the (internet) speeds are horrendous,” Mosley said. “You can’t even stream Netflix. Imagine your child trying to learn from home or do their homework. It has to be better, and folks deserve for it to be better. It’s definitely a major priority as we move forward to address the low speeds in these areas.”

“We’re always looking for additional money that’s out there to do different things,” Mosley said.

Mosley noted the funding would be used for emergency equipment.

“What we want to apply for is to have another drone,” Mosley said. “This particular drone we’re looking at is really something that will come in handy if we have an event specifically like we saw with the flooding in Letcher County.”

Mosley said the drone could take items to needy people who may be cut off from assistance due to flooding.

“This drone has the ability to pick up a life jacket and take it across a river to someone in need, it can extend a rope across it, there are a variety of different functions this one is weighted for that normal drones are not,” Mosley said.

Mosley said that the grant would require the county to match 50 percent of the cost.

“If we were selected for this funding, we would have to use some money that we’ve budgeted for equipment to match this,” Mosley said.“We wanted to go to the well to see if we could get this extra money. Of course, it’s a competitive cycle. Other counties are applying. We may or may not get it. But, it would be nice to be able to add that type of equipment to our tools to be able to have in an event like that…it’s a very impressive piece of equipment.”