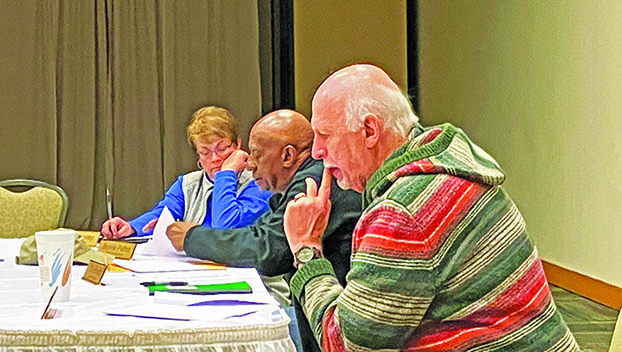 The Harlan City Council heard a proposal to apply for grant money for body armor to be used by the city’s police officers during the panel’s regular meeting for November.

Mayor Joe Meadors handed the floor over to Harlan City Police Chief Winston Yeary to talk to the council about applying for a grant for body armor.

“This is a grant we get from the Kentucky Office of Homeland Security to buy body armor,” Yeary said.

Meadors asked about the different types of body armor.

“There are different levels,” Yeary replied. “This grant requires at least a level two. Level two stops the majority of handguns.”

Yeary pointed out that the grant can only be used once every five years per officer.

The vests break down over time due to things such as perspiration.

Council member Jeff Phillips motioned to adopt a resolution authorizing the mayor to make an application for an agreement with the Kentucky Office of Homeland Security to execute any documents necessary for the body armor. The council passed the motion with no objections.

The council then moved on to a hazard mitigation resolution.

“This is from the AD district,” Meadors told the council. “It’s pretty standard. We have a city ordinance on file that you’re not allowed to build in a flood plain…I think we’re pretty good in that area.”

A council member motioned to adopt the resolution relating to the Cumberland Valley multi-jurisdictional/multi-hazard mitigation plan for Harlan. The council passed the motion with no opposition.