Pikeville defeats Harlan in second round of state playoffs 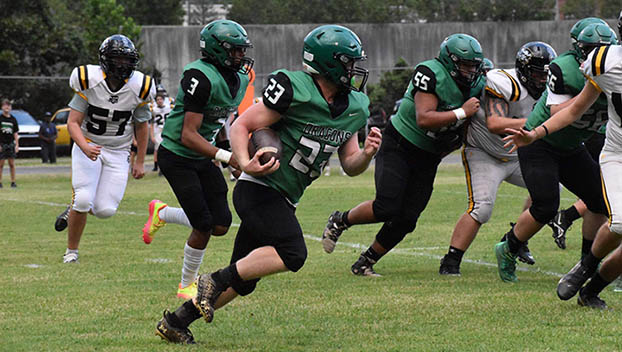 Harlan senior running back Jayden Ward took the handoff from quarterback Donovan Montanaro in earlier football action. The Green Dragons fell to Pikeville 43-8 on Friday in the second round of the KHSAA Playoffs. (Photo submitted)

The Pikeville Panthers, the defending Class A champions, are marching toward another crown in 2022.

The Panthers used a 36-0 first-half explosion Friday and rolled to a 43-8 victory over the visiting Harlan Green Dragons in the second round of the Class A KHSAA Playoffs.

Pikeville (9-2) opened the season with losses to Corbin and Covington Catholic but has reeled off nine consecutive wins.

The Panthers will advance to host Paintsville (6-5) in the regional finals of the playoffs on Friday. Pikeville blanked the Tigers 36-0 on Sept. 2 at Paintsville.

“Best team by far we’ve played,” said Harlan coach Eric Perry. “One of the best, probably three or four Class A teams I have seen since 1988, which is when I started going to state finals games.”

Since 1979, the road to the state football championship has gone through Pikeville several times, including Cumberland and Evarts High Schools, as well as HHS.

“It was good for our kids to be on the field with a state championship program like Pikeville,” said Perry. I felt like the wheels kinda fell off when we were down 8-0 early in the second quarter and didn’t get the 4th-down-and-1-half in our own territory…They are a big and physical team with some pretty good-skill guys as well.”

Pikeville opened the scoring on its first possession of the game. A nine-play, 71-yard drive was capped by an 11-yard touchdown run by Brenden Anthony at the 9:01 mark. Following a Dragon penalty, Tayvian Boykins scored the two-point conversion.

The Panthers led 8-0 after one period.

Pikeville blew the game open in the second quarter with four TDs.

With 6:54 left in the first half, Anthony scored on a 3-yard run, and Jacob Rogers added the extra point to make it 15-0.

Boykins added a 46-yard touchdown run and Duty found Blake Birchfield for a TD pass just before the half. Rogers had extra points.

The Dragons had 83 yards of offense in the first half.

The second half began with a running clock.

With 5:14 remaining in the third quarter, Blake Caudill went in from the 7 for the Panthers.

The Green Dragons avoided the shutout with 1:24 left in the game as freshman Sedrick Washington scored on a 3-yard run and also added the two-point conversion.

Harlan closed the season with an 8-4 record. It was the best year for the Dragons since 2015 when Harlan finished 9-3.

“We will be back. We aren’t going away anytime soon, and we will be back in this similar position very soon,” Perry continued.

“These seven seniors have meant everything to our program,” said Perry. “Four of them were with me that first year I took over in 2019, and we weren’t even sure if we were gonna have enough to play there for a while.

“These guys know what sacrifice is all about. All seven left it out there on the field tonight, that’s for sure. I can’t wait to see what their futures entail.”