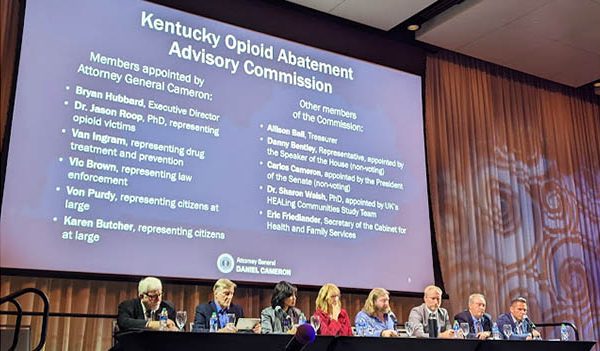 More than 100 people attended the fifth town hall of the Opioid Abatement Advisory Commission to suggest how to spend the state’s $478 million settlement with opioid manufacturers and distributors.

Bryan Hubbard, executive director and chairman of the commission, told Kentucky Health News after the Oct. 26 meeting in Lexington that the recommendations were similar to earlier town halls and probably won’t change in the remaining three, to be held in Louisville, Bowling Green and Paducah.

“We seem to have good coverage when it comes to acute treatment within Kentucky; we’ve come a long way when it comes to making that available,” Hibbard said. “There’s a lot of work to be done when it comes to those things that people need to maintain recovery and to take ownership for their lives. Housing, transportation, second-chance employment opportunities, and the resolution of legal problems that continue to hunt down people down years after by have occurred, all of those things have emerged every place we’ve gone to.”

Half of the settlement funds will go to the state and the other half will go to Kentucky’s counties and cities. The county and city funds are to be used to support organizations that develop and implement programs to combat the opioid epidemic in Kentucky. The process to apply for a grant to fund such endeavors can be found at ag.ky.gov/OAAC.  Hubbard said the commission had already received 102 grant applications through Oct. 25.

Asked how the commission will determine who gets the grants, he said, “We are going to sort applications into those areas that pertained to prevention, treatment and recovery. We will then match what are essentially the proposals to the needs. And we will figure out which organizations seem best ready and equipped to meet those needs and have deliberations and hand out money in accordance with those priorities.”

The commission, created by the legislature, has11 members, two of which are non-voting. The money will be paid out over 18 years with hopes of getting the first installment in December, Hubbard said.

“We’re going to be good partners to the cities and counties to make sure that we can be a resource of the allocation of  the money to the areas where they are most needed . . . while also ensuring that we have quarterly financial reports, which verify and authenticate those expenditures for the intended purpose,” he told the Lexington audience.

The remaining town halls will be held in Bowling Green Nov. 9 and Paducah Nov. 29. The latest was held in Louisville Nov. 1.

The Lexington town hall lasted nearly three hours. About 30 people stood to tell their stories of addiction, recovery and loss before making their recommendations for how the settlement money should be spent. Here are some of their suggestions:

Need for safe and sober housing, call for better oversight

“Sober living isn’t always safe, and it’s not always so common, and it’s is expensive,” said Matthew Otto, owner and co-founder of Roaring Brook Recovery in Lexington, who spent 20 years in and out of jail and treatment.

Dave Thomas, who is in recovery from drug and alcohol use, said he had worked in recovery for over 12 years and one of his greatest challenges is finding safe and sober housing for people in recovery. Thomas said he is clinical director at Roaring Brook and the president and co-founder of Recovery Café Lexington.

“There’s a lot of them around, but there is not many of them that are dependable, that we know are safe and sober,” Thomas said. “I have had to tell people that I can’t find you a bed, only to get a phone call that they died.”

Commission member Van Ingram, executive director of the state Office of Drug Control Policy, asked Thomas what else needs to be done, noting that the state already requires recovery residences to be certified with the National Association of Recovery Residences.

To a big round of applause, Thomas said, “I think beyond the NARR certification would be to actually have some state regulations as to what qualifies as sober living.”

Larry and Nancy Blackford of Versailles told the story of their son’s overdose death in 2017. They too spoke to the need for safe and sober housing that is affordable, noting that there were times when their son was in housing where he “wasn’t comfortable.”

Several of the speakers talked about the need for more long-term recovery options, saying a 30-day treatment program is simply not long enough.

Charlotte Wethington told the story of her son Casey, who died 20 years ago from a heroin overdose at a time when there were few long-term recovery centers available and no laws that would allow them to keep a patient if they decided to leave. Further, she said that even when he was arrested, they couldn’t keep him if they wanted to leave.

After his death, Wethington was instrumental in getting “Casey’s Law” passed that allows families and others to file a petition to request involuntary, court-ordered drug treatment for their loved ones. The law has had varying success across the state.

Wethington’s request was for more long-term residential treatment. “I think we need to keep holding on to people, keep them in a safe place until their brain begins that healing process,” she said. “And we know that it’s going to take a while. It’s not going to be something that happens overnight. They need time.”