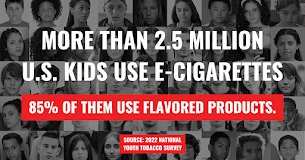 The 2022 National Youth Tobacco Survey found that 2.5 million middle- and high-school students, or about 9 percent of the total, said they used electronic cigarettes in the last 30 days, including 14.1% of high-school and 3.3% of middle-school students.

“These numbers are simply unacceptable.” Lisa Lacasse, president of the American Cancer Society Cancer Action Network, said in a news release. “We cannot stand for more than 2.5 million kids being lured into a lifetime of addiction through e-cigarettes.”

The survey, released Oct. 6 by the Centers for Disease Control and Prevention, was conducted online from January to May to both in-school and remote-learning students, with 99.3% of the surveys completed in school.

Youth use of tobacco products in any form, including electronic cigarettes, is unsafe, and most e-cigarettes contain nicotine, which is highly addictive and can harm the developing adolescent brain and increase risk for future addiction to other drugs, the CDC report says.

Among current electronic cigarette users surveyed, 85% said they used flavored e-cigarettes. The most popular was fruit flavors, followed by candy, desserts or other sweets, mint, and menthol.

“In one of its most startling findings, the new survey indicates that kids are using a wider range of flavored e-cigarette brands,” Matthew L. Myers, president of the Campaign for Tobacco-Free Kids, said in a news release.

“This is further evidence that playing whack-a-mole and cracking down on only some flavored products and brands will not end this crisis,” Myers said. “As long as any flavored e-cigarettes remain on the market, kids will shift to them. . . . Only the elimination of all flavored e-cigarettes can end the youth e-cigarette epidemic once and for all.”

The Food and Drug Administration has tried to ban some flavors and ordered manufacturers of the products to apply for marketing authorizations to sell their products in the U.S., but the process has been slow.

The CDC survey found that more than half (55%) of the students said they preferred disposable vapes, and their top three brands were Puff Bar, Vuse and Hyde. Because Hyde was not included as one of the pre-specified response options, its use was likely underestimated, the CDC said in a news release.

On the day the survey was released, the FDA said it had issued warning letters to EVO Brands and PVGT, doing business as Puff Bar, for receiving and delivering e-cigarettes in the U.S. without a marketing order.

Also, the FDA issued marketing denial orders for 32 Hyde e-cigarettes and ordered Magellan Technology, which submitted the pre-marketing applications, to stop selling and distributing the products and to remove any from the market.

“In conducting its scientific review, the FDA determined that the applications lacked sufficient evidence demonstrating that these flavored e-cigarettes would provide a benefit to adult users that would be adequate to outweigh the risks to youth,” an FDA release said. “Therefore, the FDA has determined that permitting the marketing of these products would not be appropriate for the protection of the public health.”

It is unclear what will come of the new warnings and denial. A recent investigation by Stat, the medicine-and-science publication of The Boston Globe, found that even though the FDA has ordered hundreds of flavored, nicotine-heavy vaping products off the market, vape companies are regularly defying the FDA orders and the agency is letting it happen.

The American Health Association strongly urged the FDA to better regulate these products.

“This report should send an urgent message that the tobacco industry shows no signs of slowing down its targeting of young people,” the association said in a news release. “The FDA should complete its review of all premarket tobacco applications for flavored products, remove synthetic nicotine without an FDA marketing order from the market and follow through with strong final rules to remove menthol cigarettes and all flavored cigars from the market. Meanwhile, states and communities must continue their efforts in support of prohibiting the sale of all flavored tobacco products.”

That said, it does appear that e-cigarette use among teens could be declining. According to the 2019 Youth Risk Behavior Surveillance System report, the most recent data available, 26% of Kentucky’s high school students and 17.3% of middle school students had used an electronic vapor product on at least one day in the 30 days prior to the survey. Nationwide, that rate was 32.7%.

However, a separate survey taken in late 2020 found that 34% of the 400 Kentucky youth surveyed believed there had been an increase in tobacco use due to the pandemic.