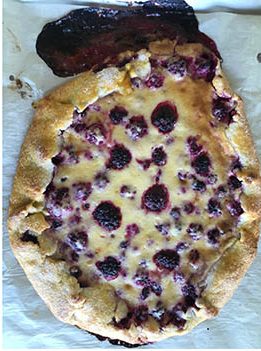 I ran across today’s recipe for Blackberry Cheesecake Galette while browsing through the Summer 2022 issue of The Pioneer Woman Magazine. The recipe’s picture looked great, and galettes are a great alternative to pie. I could not resist tearing the recipe from the magazine, which sat on my kitchen counter for a couple of days before I decided to make it. Even though I usually make my own pie crust, I decided I’d buy crust and see how it worked since I went to the grocery the next day. Plus, rolling out prepared crust would be simpler than making pie dough.

The next day while I was in the dairy section of the grocery, I spotted the premade pie crust and was shocked when I saw the price – $4.99. There was no way I would pay that price when I could put one together at home for less than a dollar, especially when I wasn’t even sure if this recipe would be something we would like.

I returned home from the grocery, put the groceries away, rearranged the oven racks, and turned the oven on to preheat. Next, I pulled a cookie sheet pan from the cabinet, and since it didn’t have sides, I didn’t bother to turn it over to place the parchment paper on it (like the recipe recommended). If your pan is wide enough, I don’t know why you’d have to bake the galette on a turned-over pan.

After pouring the cornstarch and half the sugar into a medium size bowl, I grated the lemon zest right on top, added one tablespoon of the freshly squeezed lemon juice, and stirred the mixture until the cornstarch dissolved. Then I just poured the partially thawed blackberries into the mix and gave it a gentle stir to coat the berries. I set the bowl aside and started the cheesecake part of the filling.

The cream cheese was already softened, and I placed it in a small bowl along with the sour cream, egg yolk, vanilla, the rest of the sugar, and one tablespoon of lemon juice. I set the mixer speed to medium-high and let it go for 3 minutes.

Before pouring the berry mixture onto the prepared pie dough, I removed seven big berries for later. (This is a wasted step.) The berry mixture thickened and didn’t ooze when poured out onto the dough. I spread the berries to within 2 inches of the edge of the pie dough, then drizzled the cream cheese mixture over the top and placed the remaining blackberries on top. After gently folding the dough edge over the galette, I brushed the edge of the crust with the beaten egg. I didn’t have coarse sugar, so I just sprinkled granulated sugar over the egg wash.

The galette went into the oven for 30 minutes, and when I took it out, it was apparent I’d accidentally torn the pie dough, and some of the blackberry filling had oozed out. Oh well, it still looked pretty good, and I hoped it would be ok.

By the time we left our house to see our grandson, Owen, the galette had cooled, and I placed it, parchment paper and all, into a round Tupperware container. Ok, we were on our way.

After lots of cuddling and playing with Owen, we sat down to supper. Brad gave thanks for the meal and our family, and we ate. Once our plates were clean, it was time for dessert, and everyone was ready to try this new recipe.

The galette wasn’t overly sweet and had a tartness that everyone liked. My first piece was very small, so I cut another small piece, as did our son-in-law. After a bit of discussion, we all agreed that this Blackberry Cheesecake Galette falls into the “Nailed It” category. We also decided that you could swap out blueberries for blackberries, which would be equally delicious. It’s a good thing I have more berries in the freezer.

• Place an oven rack in the bottom position and preheat to 400 degrees.  Flip over a baking sheet and line with parchment paper.  Unroll the pie dough on a work surface, then stack the 2 rounds, gently pressing to adhere.  Roll out into a 12-inch round and transfer to the prepared baking sheet.

• Combine the blackberries, cornstarch, salt, 1/4 cup sugar, lemon zest and 1 tablespoon lemon juice in a medium bowl and gently mix until the cornstarch has dissolved.

• Use a slotted spoon to remove six of seven blackberries to a bowl.  Spoon the remaining blackberry mixture into the center of the pie dough, leaving a two-inch border.  Drizzle the cream cheese mixture on top, leaving the border uncovered.

• Gently fold in and pleat the dough edge, taking care not to rip it.  Scatter the reserved blackberries on top of the filling.  Brush the crust with the beaten egg, then sprinkle with the coarse sugar.

• Bake the galette until the crust is a deep golden brown, the cheesecake is set and the blackberries are slightly bubbling through the cheesecake in spots, 30 to 35 minutes.  Transfer the baking sheet to a rack and let the galette cool completely, about one hour.