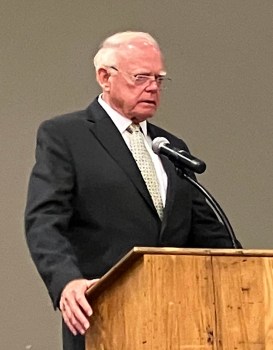 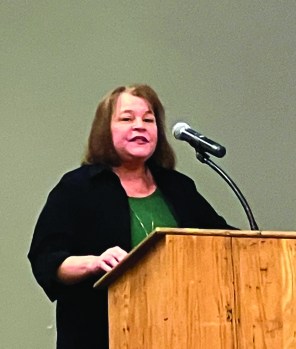 The position of Circuit Court judge is on the ballot in November, bringing current Circuit Court Judge Kent Hendrickson and challenger Karen Davenport into the recent candidate forum held by the Harlan Chamber of Commerce.

Moderator Brandon Robinson asked the candidates their considerations during the sentencing phase of a case that may come before them.

As the incumbent, Hendrickson was given the first chance to answer.

“If we try a case before a jury, the jury fixes the sentence, although I have the authority to reduce it within the sentencing range,” Hendrickson explained.

Hendrickson stated he trusts the jury’s opinion on a sentence.

“I always accept what the jury has fixed because I respect Harlan County juries,” Hendrickson said. “I’ve never heard a verdict yet that I’ve disagreed with or questioned.”

Hendrickson also addressed plea agreements, which are part of many cases in Harlan County.

Hendrickson pointed out there are sentencing guidelines set by state law.

Hendrickson mentioned that plea agreement sentences must fit with the legal range requirements for that class of felony.

“If a plea agreement is to plead guilty to a Class C felony and the recommended sentence is three years, well, that’s illegal,” Hendrickson said. “It’s got to be five to 10. So, there are a few things to consider, but mainly I accept what the jury tells me.”

“Most – 90 to 95 percent – of cases, not just in Harlan County but across the country, are resolved by plea agreement,” Davenport said. “Once there is a plea agreement that’s presented to the court, this is the time when the court can take a look at a defendant’s entire criminal history.”

Davenport stated the court has an opportunity to step in once a plea agreement is presented.

“If they (the defendant) are a repeat offender, if there are any special considerations, sentencing is the time that can be called into question,” Davenport said. “You can really take a look at an agreement, and that’s where the judge’s role comes in.”

Robinson then asked the candidates how the defendant’s mental health would impact a case’s adjudication.

“We are seeing a much greater problem with people with mental health issues in our community recently,” Davenport said. “At a recent city council meeting, this was discussed, the fact that we are seeing more and more people on our streets that are homeless that have mental health issues. So, we have to be well aware of these things and try to do things that will help these people.”

Davenport pointed out a person with mental health issues is not a “standard” defendant.

“We absolutely have to consider that and the resources that we have here in Harlan. Yes, we do have some, but the reach might need to be greater,” Davenport said. “It’s a great concern, and it’s a growing concern in Harlan County.”

“There is very little statutory authority for courts to deal with mental health,” Hendrickson said. “There are examinations we can order, and most of those are through District Court. Actually, if someone is mentally ill and is incompetent to go to trial, the most we can do, to be honest with you, is send them to a state institution for one year. We don’t have broad authority to deal with mental health issues.”

Voters go to the polls to cast their ballots in the general election on Nov. 8.