Pickin’ at the Possum set for Friday 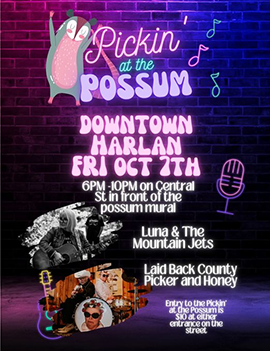 Live music is coming to the streets of downtown Harlan, with the second installment of Pickin’ at the Possum set for Oct. 7.

“Pickin’ at the Possum is an idea that a few local musicians have put together to put on a music series in downtown Harlan,” Pennington said.

Pennington explained that the event’s first edition faced the obstacle of bad weather.

“The last time, we had some weather issues, so we had to end up having it inside,” Pennington said. “This time, we’re hoping we won’t have any kind of weather issues or anything like that.”

Pennington said the music will take place in front of a mural on Central Street that features an opossum’s large depiction.

“We’re planning on closing off Central Street from First Street to Main Street,” Pennington said. “There will be a $10 entry fee.”

According to Pennington, there is a reason behind the admission fee. “The reason we’re charging is we’re hoping to establish a fund so we can continue to do this event next year as well so that this can be a year-round thing,” Pennington said.

The music will be on the main stage in front of the possum mural, with other attractions available for those in attendance throughout the area.

“There will be vendors, and there’s going to be food,” Pennington said. “We’re hoping the community members will become involved as well.”

Pennington mentioned he would like to see current and future local businesses become involved in future installments of the concert series.

“The concert begins at 6 p.m.,” Pennington said. “Luna and the Mountain Jets and Laid Back Country Picker are the two headlining artists for Oct. 7.”

Pennington said headliners are scheduled to take the stage at approximately 8 p.m. Central Street will be closed for the event at approximately 4 p.m. on Oct. 7, with gates opening at 6 p.m.