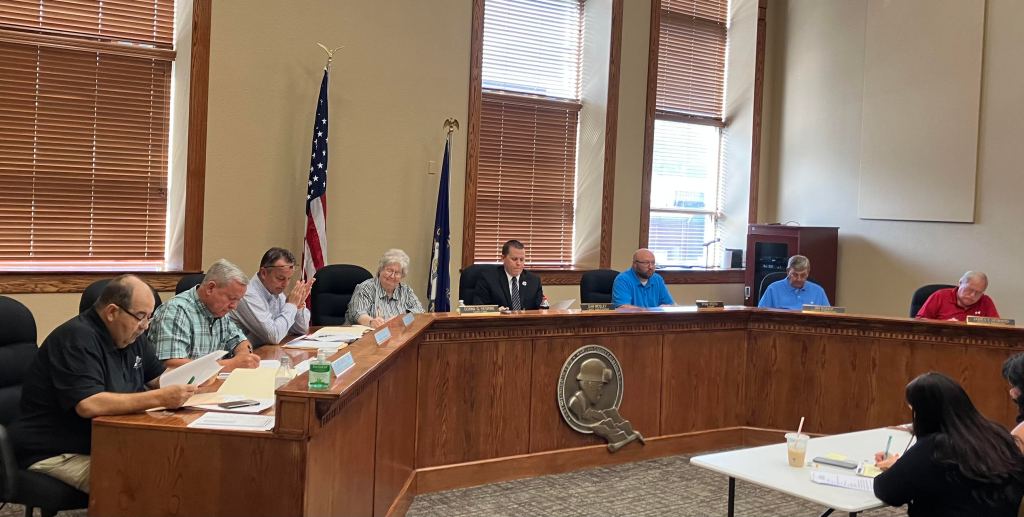 The Harlan County Fiscal Court voted to apply for a pair of hazard mitigation grants recently. (Photo by Joe Asher)

The Harlan County Fiscal Court tackled multiple topics during a meeting on Tuesday, Sept. 20, including hearing the tax rates set by the Harlan County Public Library and applying for a pair of hazard mitigation grants.

Haynes also updated the court on a new project the library has in the works.

“Included is a picture of the new Harlan County Museum,” Haynes said.

“We’ve got the front painted, and we will be proceeding to put a new roof on the building,” Haynes said.

Haynes told the magistrates he hoped they would complete the project within the year.

“This will be a permanent home for the U.S.S. Harlan exhibit that we housed for a while. It’s going to go in there as well as a Cawood Ledford exhibit and a couple of other exhibits pertaining to the history of Harlan County,” Haynes said.

Mosley pointed out that both tax rates set by the Harlan County Public Library remain unchanged from the previous year.

“We will reflect that Mr. Haynes appeared on behalf of the Harlan Public Library District Board of Trustees and presented their tax rate certification to the court,” Mosley said.

The court also addressed applying for a grant for weather radios.

“Because we touch counties that were impacted, we qualify for hazard mitigation grant funding,” Mosley said. “We’ve identified two things that we feel like we need to go after right off the bat.”

Mosley stated he would like to apply for hazard mitigation grants for weather radios and to address an issue in the Catrons Creek area.

“We would like to get weather radios into the hands of as many people as we can get them into,” Mosley said. “As we’ve learned in this most recent disaster if you’re asleep and it’s flooding … If you have the ability to get a weather radio into people’s hands, that can serve as an alarm clock in an event like that.”

Mosley mentioned over 40 people perished in the recent flooding event.

Magistrate Bill Moore motioned to apply for the grant, seconded by Magistrate Clark “Sparky” Middleton. The magistrates passed the motion with no opposition.

“The next one is an item that has been brought to our attention many times by the residents of the Catrons Creek area in lower Elcomb,” Mosley said. “You all have been approached about a wall that has been falling in that the county put in years ago to stabilize the ground where the sewer line goes up Catron’s Creek.”

Mosley explained the wall is alongside the river.

“This needs to be stabilized to protect critical infrastructure that exists right there on that bank,” Mosley said. “This particular issue has been documented as a serious issue that impacts critical infrastructure, with the sewer line being there. It would be my recommendation that we apply for the hazard mitigation grant funding to correct this wall issue.”

The court passed the motion with no objections.