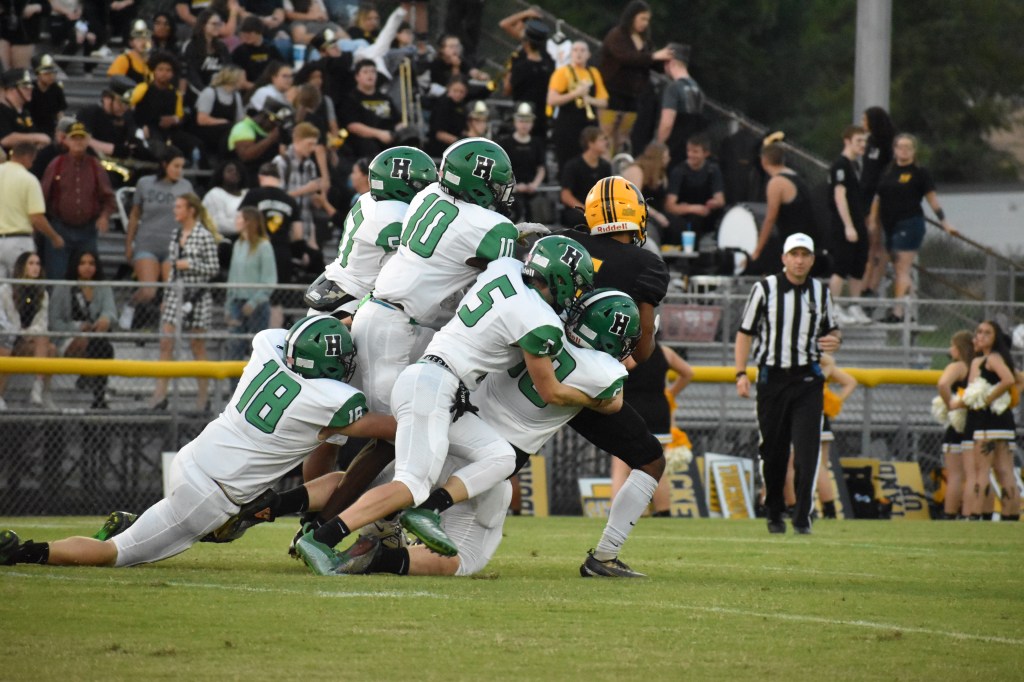 The Dragons and Yellow Jackets battled it out on Friday with Harlan coming up a point short in its first loss of the 2022 season. (Photo by Christin Freeman)

It all came down to the defense in Friday’s game between Harlan and Middlesboro.

Trailing 21-14 with under five minutes to play, the Green Dragons used a 12-play, 58-yard drive over seven minutes to score.

Harlan senior running back Jayden Ward capped the drive with a 1-yard touchdown run at the 4:11 mark.

The Middlesboro defense kept Darius Akal inches from the goal line to escape with a 21-20 win, handing Harlan its first defeat of the year.

“We had our changes. We came up six inches short down there,” said Harlan coach Eric Perry. “Hat’s off to Middlesboro. They’ve got a good team.”

In the first half, with Middlesboro in possession, the Jackets’ center snapped the ball before a whistle was blown. Ward picked up the ball nearly 15 yards downfield.

The six-man crew agreed the Yellow Jackets had called timeout.

Harlan fans and the coaching staff were irate about the call.

“What can you do about it now,” Perry said of the play following the game.

The game was scoreless after one quarter.

Middlesboro’s Cayden Grigsby scored on a seven-yard touchdown run, but the Jackets were called for holding. On the next play, Grigsby threw an interception to Harlan’s Dylan Middleton with 2:44 remaining in the first period.

Following a Harlan punt, the Yellow Jackets started on their own 30 at the end of the quarter.

Grigsby had a 25-yard run, and three Dragon penalties pushed the ball to the Harlan 3.

The Middlesboro QB scored on the next play with 6:04 left in the first half. Senior kicker Sopheaktra Sin added the extra point to make it 7-0.

After holding the Dragons on downs, Grigsby caught the punt and went 15 yards to the Jacket 46. After Grigsby had an 18-yard keeper, the QB connected with Tyler Sturgill for a 32-yard TD pass with 1:19 to play in the quarter. Sin’s kick was good.

“That quarterback is a heck of a player,” Perry said of Grigsby. “He’s tough to handle.

Harlan junior quarterback Donovan Montanaro needed one play as he found Will Austin for a 47-yard touchdown pass 12 seconds later. Jayden Ward added the two-point conversion as the Dragons trailed 14-8 at halftime.

The Green Dragons put together a nice drive midway through the third quarter. A seven-play drive that covered 34 yards was capped when Ward scored from the 5 at the 2:15 mark.

Middlesboro’s defense kept Ward out of the end zone, but Harlan tied the game at 14-all.

The Yellow Jackets wouldn’t allow the game to be even for long as Middlesboro put together a six-play, 54-yard drive.

Yellow Jacket senior Vincent Smith carried two Harlan defenders on his back into the end zone for an 18-yard touchdown run with 11:53 left in regulation. Sin’s kick made it 21-14.

“Hopefully, we can learn from this and move on,” said Perry. “We really felt like we could win the ball game.”

Harlan gained 155 yards on the ground. Ward led the team with 86 yards on 14 carries. Darius Akal added 61 yards on 13 carries.

The Green Dragons had 202 yards of offense on the night.

Nate Montonaro, Mefford, and Noah Kirby each had a tackle for loss yardage. Mefford recorded a sack.

Harlan’s Tayquan Vick received an ankle injury in the first half.

“From what I’m hearing, he’s OK,” said Perry. “It appears to be a bad sprain and not a break. Hopefully, he can bounce back from this, and we’re all praying for him.”

It was Middlesboro’s fourth straight win over the Dragons and 14th win against Harlan since the 1998 season.

The 3-1 Green Dragons will return to action Friday at home against Lexington Sayre (3-1).

“I’m sure they’ve got a nice club, and coach (Chad) Pennington does a great job over there,” added Perry.

Middlesboro, winners of three straight and now 3-2 on the season, will hit the road for two consecutive games beginning Friday at Morgan County in the Sorghum Bowl.

The Cougars are 1-4 on the season.

The Yellow Jackets will visit Breathitt County in a key district showdown in Jackson on Sept. 30.