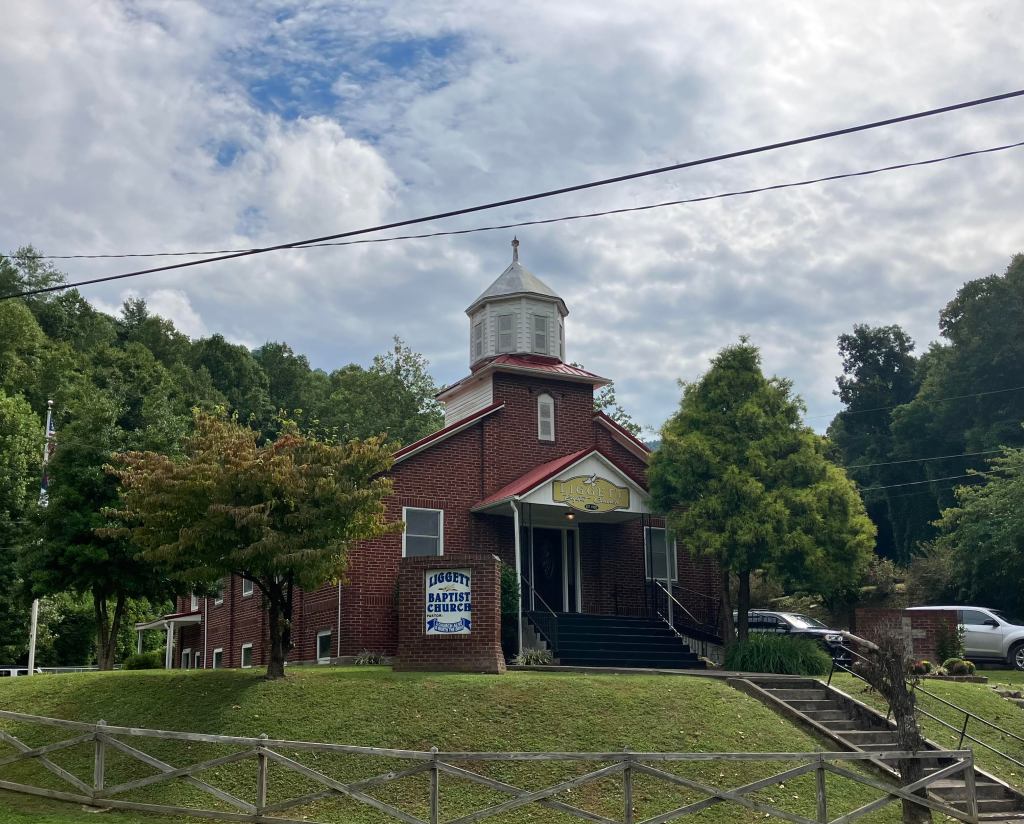 Liggett Baptist Church marked 102 years in operation over Labor Day Weekend, with many people coming in from places far and wide to remember their time in the former coal camp community. (Photo by Joe Asher)

Harlan County has many churches, but few have the lengthy history of Liggett Baptist Church, located on KY 72 in an area formerly Liggett Coal Camp.

The church recently celebrated 102 years since its founding, with folks coming in from places such as Alabama, Tennessee, and other parts of the country to take part in the celebration of a place that has meant a lot to each of them.

The day saw many people with a personal connection to Liggett arriving for services, some of who had not been there in a long time.

Harlan Circuit Court Judge Kent Hendrickson, who lived in the Tally Hollow part of Liggett Coal Camp up until he was five years old, attended the celebration.

“My connection with Liggett is it’s the first place I lived,” Hendrickson said. “Liggett Baptist Church is the first church I attended as a child. This was a bustling place back then; it was a good camp. My father ran the commissary …  It was just a beautiful place. It was a wonderful place to be.”

Felosi recalled seeing the surrounding community change from a place with many houses, stores, a school, and family homes to the church building being one of the few remaining reminders of Liggett Coal Camp.

“At one time, I’ve seen this church at capacity, with people standing up in the back,” Felosi said. “But I’ve also seen it with as little as 15 people…I think it’s that way with a lot of places.”

Felosi talked about the importance Liggett Baptish Church has had in her life.

“It means everything to me,” Felosi said. “It was the home base for life … It was something that made an impression on me to live the life that I’m living now as a Christian.”

Felosi recalled Liggett Baptist Church was where the ceremony was held for her graduation from Liggett Grade School.

“I was in the last graduating class at Liggett Grade School,” Felosi said. “The church was the hub, right in the middle of the community.”

Carolyn Hensley Hatfield has been a member of Liggett Baptist Church for more than 75 years.

“I was raised in the camp here,” Hatfield said. “I probably started church when I was about five years old. I turned 81 in July.”

“I love to sing,” Hatfield said. “I guess the first solo I sang. I was probably 7 or 8 years old. I was scared to death, so they let me stand with my back to the audience, and I’ve been singing ever since. I have tried to be a good Christian, and each pastor we’ve had, I’ve tried to back them up. As long as I knew they were right, I was right behind them.”

Hatfield summed up her feelings about Liggett Baptist Church.

“I love the church,” Hatfield said. “It’s my home church.”

Current Pastor Bobby Cornett gave his thoughts on Liggett Baptist Church and his time as pastor.

Cornett pointed out that throughout the church’s history, the message has remained the same. He added that going forward, the intention is to continue down the same path.

“We want to continue to preach Jesus and continue to do mission work in and around our county,” Cornett said. “We have a lot of things coming up, we’re doing a playground renovation to make it more accessible, but we also want to make it a community playground and open it up to people in this area.”

Cornett added he is happy to be the current pastor.

“I am honored and blessed to be pastor here,” Cornett said. “I know every pastor that came before me felt the same way. The love of the people in this church is overwhelming. You can feel it when you come in the door.”

According to the church’s website at www.liggettbaptistchurch.org, Liggett Baptist Church started in 1920 in the Catron’s Creek area when coal mines were first going into operation in the area. The church held services in a log house named Ball’s Chapel. Coal companies were building homes in the area, and people began moving in for coal jobs. Membership increased as people walked to the church from area coal camps such as Liggett, Bardo, and Stanfill. Moving to an eight-room wood building, Liggett Baptist Church was heated with a potbellied coal-burning stove and with wood benches for seating. The original building burned in 1943, and a new brick building was built on the site. With a few additions, this is the building that stands today.