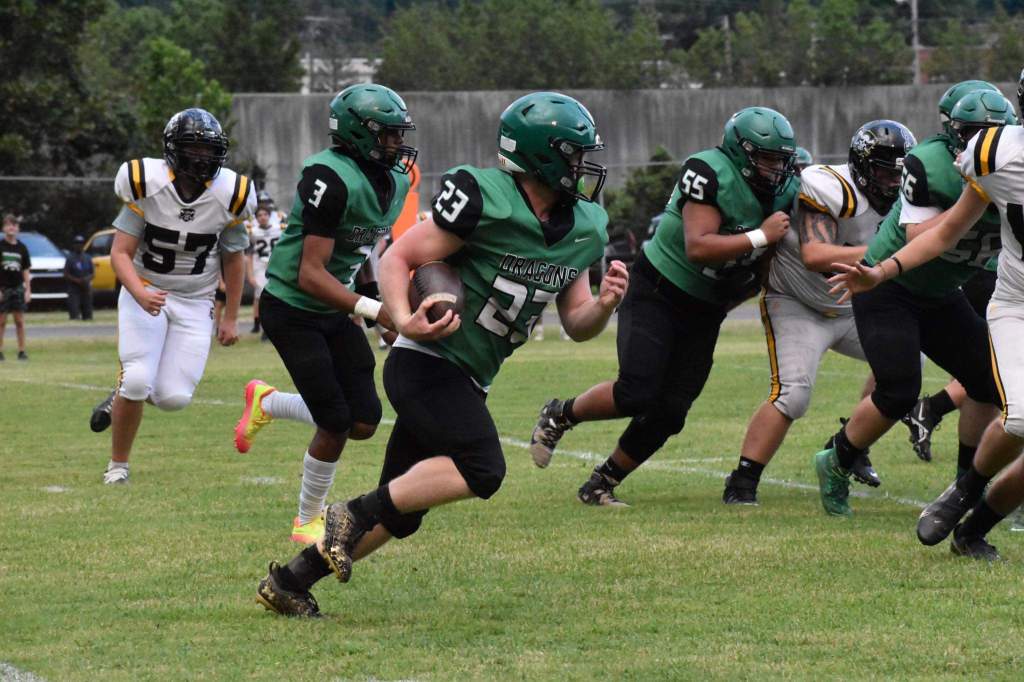 Jayden Ward and Darius Akal combined on 285 yards rushing Friday in the First Priority Bowl at Harlan as the Dragons escaped with a 28-22 victory.

Ward, a senior running back, led the Green Dragons with 143 yards on 15 carries. Akal, a sophomore, followed with 142 yards on 15 rushes.

The Pirates were held to 60 yards on the ground, with senior running back Yamil Cruz gaining 51 on 16 carries.

Harlan opened the game with a seven-play, 75-yard drive that ended with a 14-yard touchdown run by Ward at the 8:45 mark of the first quarter. Dylan Middleton added the two-point conversion as the Dragons led 8-0.

The Pirates responded with a six-play drive as quarterback Jayson Coburn found Koty Roberts for a 49-yard touchdown pass. Cruz added the two-point conversion to even the game at 8-8 with 6:43 left in the period.

Harlan fought back with the help of Darius Akal’s 29-yard kickoff return to the Berea 47. A 14-yard run by Ward and a 15-yard run by quarterback Donovan Montanaro pushed the ball to the 1. Ward went in on the next play for the score. Middleton’s two-point conversion run made it 16-8 with 3:47 to play in the opening quarter.

Neither team scored in the second quarter, but Harlan moved the ball down to the Pirates’ 6-yard line before a fumble stopped the drive with 42 seconds remaining in the half.

“We would’ve had the momentum going into the locker room if we had scored there,” said Perry. “We didn’t play great, but we did get the win.”

With the Harlan band performing at the half, skies became cloudy with lightning strikes forcing a delay for nearly an hour. Officials gave the teams time to get ready for an exciting second half.

The Pirates received the ball and marched 62 yards on five plays as Cruz capped the drive with a 19-yard TD run at the 8:46 mark.

Harlan came back with a scoring drive that covered 84 yards and took ten plays to find the end zone. Ward had runs of 14 and 33 yards, with the senior going in from the 4-yard line with 2:24 left in the third period, and Harlan led 22-14.

The Green Dragons were held, and a bobbled snap on a punt attempt by Harlan gave the Pirates the ball on the Dragons’ 11-yard line.

Six plays later, Cruz scored from the 1 with 7:38 to play in regulation. Cruz added the two-point conversion to tie the game at 22-all.

“Defensively, we had a few collapses,” said Perry. “I felt like our kids lost their focus at times. I don’t think it was from lack of effort.”

The Dragons found themselves on their own 35 before runs by Ward, and Akal had the ball on the Berea 37. On the next play, Akal went up the middle and scored with 4:56 on the clock.

The Pirates were facing fourth-and-seven when a pass interference penalty by Harlan gave Berea the ball on the Dragon 33. The Harlan defense tightened and held the Pirates to six yards on two plays. Coburn had two incomplete passes, including one on fourth down, as the Dragons took over on their own 26.

“There were some bright spots on defense, but I felt like we had trouble getting lined up at times with blown assignments,” said Perry. “Hopefully, we can learn from this and move on.”

Harlan (1-0) will journey to Pike County to face East Ridge (1-0) at Belfry in the first game of the Pike County Bowl on Friday at 6 p.m. The 0-1 Pirates will battle Bourbon County in the second game.

Berea (0-1) travels to Nicholas County (1-0) to play in the Travis Sims BlueJacket Bowl.