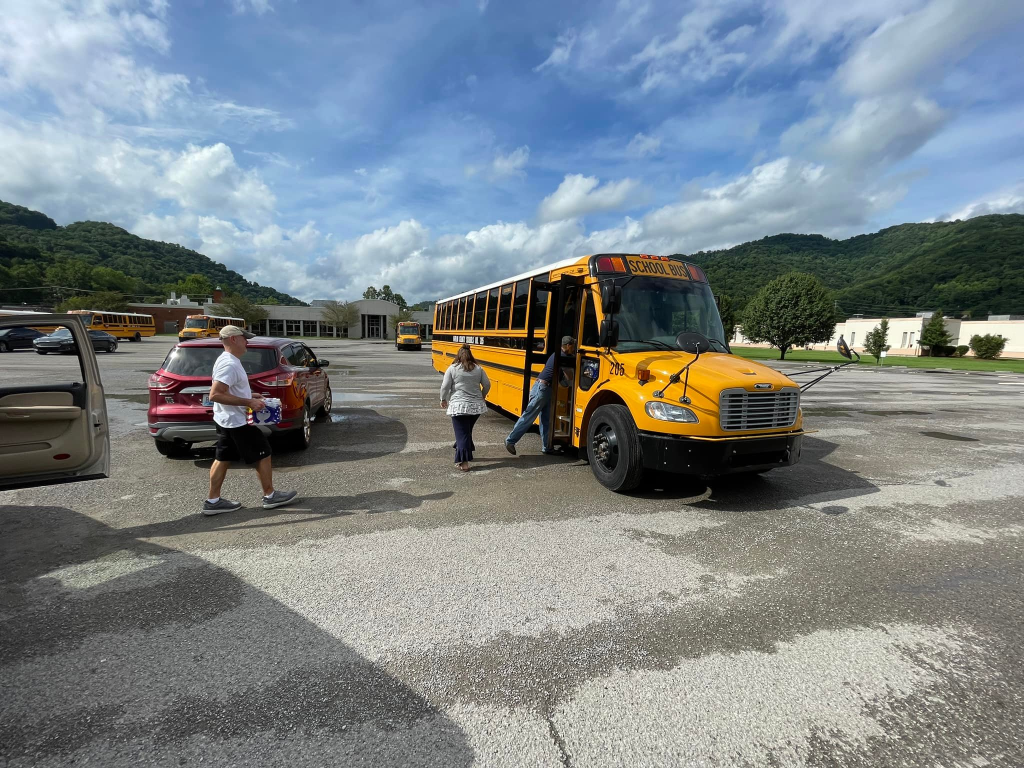 The Harlan County School System has gone into action to assist those in neighboring areas adversely impacted by recent flooding, using the school district’s busses and a large box truck to deliver donated items needed by the flood victims.

According to Roark, as of Tuesday morning, four buses and a box truck filled with relief items have made the trip to Letcher County, with more on the way.

“On Friday, the severity of the destruction came to light,” Roark said. “My board members and staff members started contacting me wanting to help. So, we started putting together relief efforts.”

“Friday afternoon, we sent out a box truck that was full,” Roark said. “Our box truck is huge, it’s refrigerated, and we sent it out completely full of supplies.”

Roark said after the box truck made its first trip, many Harlan Countians heard what was going on and decided to help.

“We opened it up to the community, and they started bringing supplies in,” Roark said. “We sent three busses and a box truck yesterday (Monday), and we’ve already sent two busses today (Tuesday).”

Roark mentioned he went with one bus to Fleming Neon on Monday, with the rest of the supplies taken to Letcher County Central.

A bus is being utilized for collecting donated items.

“We’ll keep a bus on our parking lot at the Harlan County Schools Central Office,” Roark said. “Anybody can come out at any time during the day from 7 a.m. until dark, and they can put stuff on the bus. We’ll have folks to help them if they want to come out during our work hours from 7 a.m. until 4 p.m.”

Roark noted many churches have been donating items to be delivered by the school’s vehicles. He emphasized a significant need for supplies in the areas that have been hit.

Roark estimated approximately 30 to 40 percent of the homes in Fleming Neon had been damaged or destroyed.

According to Roark, the items most needed are things such as canned food.

“Canned food that can easily be opened is nonperishable and can be eaten without being cooked,” Roark said. “Also, any kind of hygiene items, water, cleaning supplies.”

Hygiene items would include things such as toothpaste, toothbrushes, soap, etc.

Roark added there is no timeline on how long the deliveries will continue.

“One of our principals, Stan Nicely, he had $1,000 from his church to go and buy supplies,” Roark said. “As he was in Walmart buying things, people kept walking up to him and handing him $50, $100, to buy more stuff with. People he didn’t even know were handing him money … People are very generous in our area. They know what it’s like to be without, and they don’t like seeing other people without.”

Roark stated his appreciation for those doing the driving, loading, collecting, and other work involved in getting the supplies to their destination.

“I just want to let our people know that we appreciate their time,” Roark said.