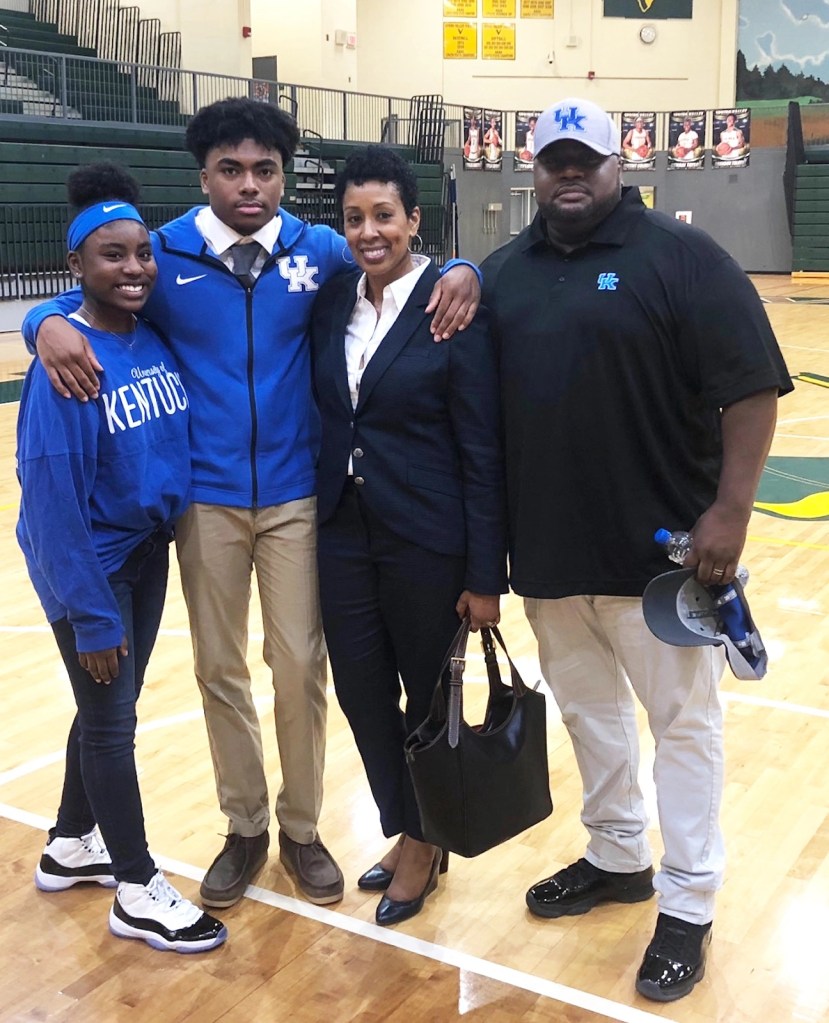 Tony Geiger, right, and his wife, Ramona, and daughter Ja'nia when their son Jalen committed to Kentucky. Tony Geiger flies his UK flag proudly every day in Columbia, S.C., where the family lives. (Photo submitted)

Tony Geiger’s son is UK junior defensive back Jalen Geiger and he’s not shy about showing his support for the Wildcats in Columbia, S.C., where the Geigers live.

“In front of our house there is a big UK flag,” Tony Geiger said. “We are nestled between Clemson and South Carolina fans but I show my UK love on my truck, too. We push the Big Blue Nation here.”

Kentucky has dominated the recent series with South Carolina, a trend expected to continue this year. Tony Geiger says his son believes UK is good enough to reach the SEC championship game this year.

“South Carolina has a great venue and a respectable program but Jalen just loved everything about Kentucky,” Tony Geiger said. “I am actually pretty surprised sometimes walking around with my UK T-shirt on at the respect UK gets locally. It might be something like, ‘You guys got our number.’”

Kentucky opens the season Sept. 3 hosting Miami at 7 p.m. in Lexington. Tony Geiger and his wife will be there way before kickoff.

“We tailgate at every game and get there at 7:30 no matter whether it is an afternoon or night game. We enjoy our tailgate and make a day of it,” Tony Geiger said.

Jalen Geiger is one of 115 players nationally named to the watch list for the Wuerffel Trophy, college football’s premier award for community service. Kentucky’s Courtney Love won the award in 2017.

Geiger played in all 13 games last year with two starts when UK went 10-3. He had 18 tackles and an interception return for a touchdown.