Pickin’ at the Opossum 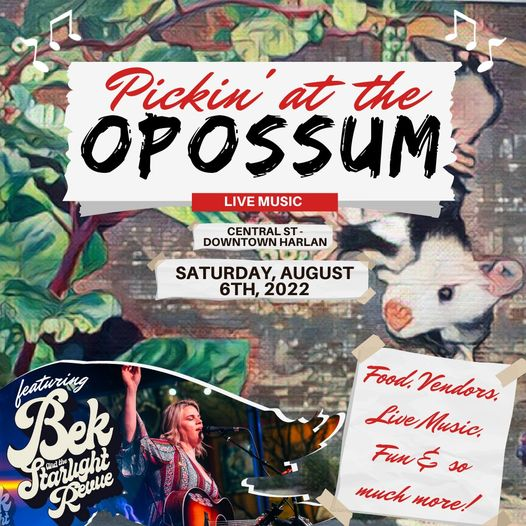 The streets of Harlan are set for a brand-new concert series, featuring local and regional artist. Pickin’ at the O’possum kicks off with the first show on Saturday, Aug. 6.

Executive Director of the City of Harlan Tourism Commission Brandon Pennington gave the run down on the event during an interview.

“For the last few summers, we’ve been trying to start a music series in downtown Harlan,” Pennington said. “We tried it in 2019 and had a pretty good turnout. COVID hit in 2020 and we didn’t do a concert series that year, but in 2021 we did Music on Main.”

According to Pennington, a group of local musicians approached the city of Harlan, Harlan City Tourism and the Harlan City Police Department with a plan for a music series to take place in August, September and October.

“This is the first one,” Pennington said. “We’re going to have a few local acts perform leading up to the headliner, which is going to be Bek and the Starlight Review out of Pikeville.”

Pennington explained the event will feature more than music.

“We’re planning on having some vendors,” Pennington said.

The event will take place on Central Street in Downtown Harlan.

“The street will be blocked off,” Pennington said. “There will be a $10 entry fee, and you’ll get a wrist band to show you’ve paid your money to get in and out.”

Pennington mentioned some of the area retail establishments will be open.

“It’ll be about four to five hours of music, vendors, that sort of thing,” Pennington said.

Pennington said the event will begin at approximately 6 p.m. and run until around 10 p.m.

Pennington the next date in the concert series has not yet been decided.

“We’ll be posting it to the Harlan County Tourism website – www.harlancountytrails.com/events – our Harlan Tourism Facebook page, and of course if anybody has any questions they can give us a call at 606-573-4156.”