Living on Purpose: Birds of a feather flock together 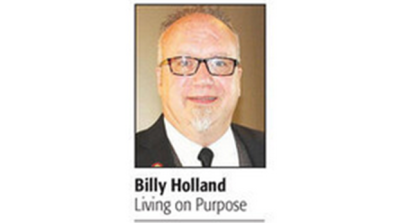 There is a huge difference between personal transformation and just talking and wishing. We can counsel, advise, pray, and encourage someone, but they are the only ones who can discipline their thoughts, take the initiative and chart a new direction. For example, being an optimistic person does not fall out of the air and happen on its own, but rather it’s a learned behavior similar to developing bad habits such as a negative attitude or a rude personality. We cannot prevent unpleasant things from happening to us, but we decide if they will control us, or we prevent them from controlling us. As we discover what God wants us to be, we are then faced with deciding just how much we will do.

Philippians 1:6 declares, “Being confident of this very thing, that he (God) who began a good work in you will carry it on to completion until the day of Christ Jesus.” The writer is saying that God considers you his most valuable possession and is filled with anticipation and excitement to see you flourish and thrive according to his plans. However, it will require self-discipline to overcome fear and doubt as he will not force us to obey him the same as He does not make us love him.

In the course of our lives, we watch those who have accomplished admirable things while the unseen forces of negativity remind us how we could never do that. You are not good enough or you do not deserve this or that are some of the most common lies that people face when dealing with low self-esteem. The truth is these individuals who are soaring in the clouds have also been hounded by the same dark voices and deceptions, yet became determined to rise above them. Anyone who has advanced in God’s wisdom and obedience has learned to be careful about who they listen to. Sadly, some have become a victim of their environment and must break free from the cycle of dysfunction.

Our thoughts control our actions and eagles have no business hanging around in the chicken coop.

Birds of a feather flock together and if you are determined to be an eagle, it’s important to spend time with other eagles.

A sound mind is one of the greatest gifts we have been given and it’s our responsibility to guard and protect what it absorbs. The ears and eyes are windows to the soul and as the caretaker of our garden of thoughts, we must be very careful of what type of seeds are planted and allowed to grow.

We are reminded in Proverbs 23 that as a person thinks in their heart, so are they. You see, The farmer was aware of what the eagle was supposed to be, and knew if the eagle believed he was a chicken he would always live like a chicken. A true leader can recognize another leader and it was the zookeeper who understood the eagle’s potential and did everything he could to help him see his destiny. Many of us have been blessed to have someone who discerned our abilities and helped us fly. In turn, after we realize who God has called us to be, it’s our mission to help others that need the encouragement and inspiration to look in the mirror and see themselves the way God sees them. I know people who are confused and are without a specific direction as they say they cannot find their way. We may indeed be adrift, but God knows exactly where we are and where we need to be. If we sincerely seek him in prayer, Matthew 7:8 promises, “For everyone who asks receives, he who seeks finds, and to him who knocks it will be opened.”

We are called to be eagles, but our nature tends to be complacent and content to take the easy way.

When Jesus was in the Garden of Gethsemane just before he was arrested, he asked his disciples if they would watch and pray with Him. After a while, He went to check on them and they were sound asleep. He is quoted in Matthew 26:41, “Watch and pray so that you will not fall into temptation. The spirit is willing, but the flesh is weak.” The story of the eagle and chicken is about knowing our identity and as Luke 1:37 declares, “Nothing is impossible with God.”

Read more about the Christian life and Dr. Holland’s book, “Convictions and Considerations – Encouragement For The Soul” at billyhollandministries.com.