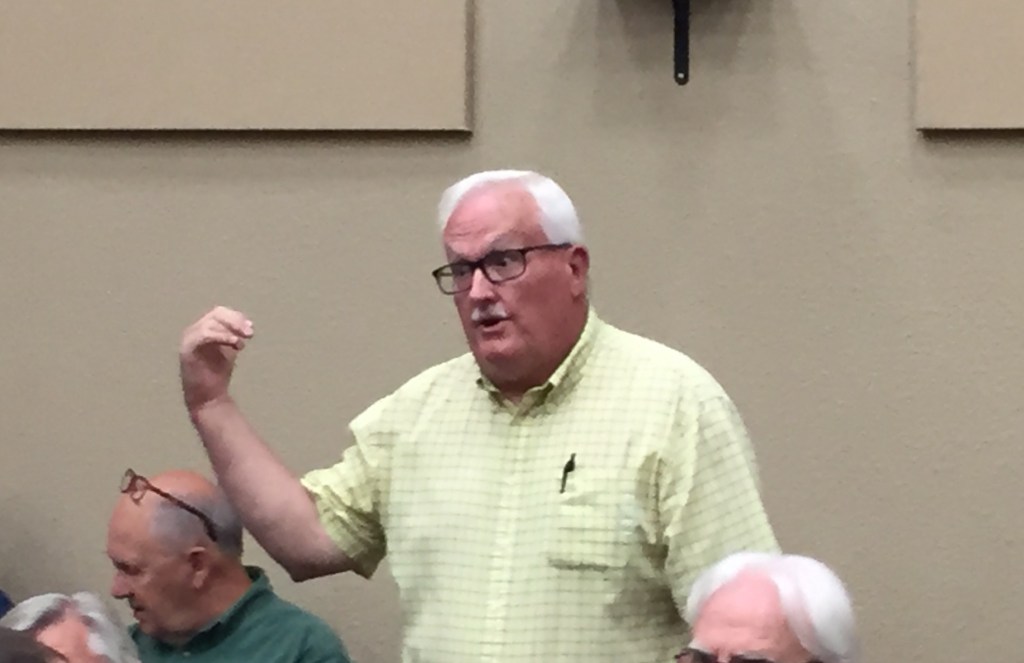 During a recent meeting, the Harlan County Fiscal heard from city of Harlan Mayor Joe Meadors regarding some concerns about the Coal Miner’s Memorial monument that stands on the lawn of the Harlan County Courthouse.

Harlan County Judge-Executive Dan Mosley called on Meadors to address the court early in the meeting.

“I’m here today with some other interested individuals to discuss with you some things we’d like to see done with the Coal Miner’s Memorial,” Meadors said. “They’ve got a professional landscape artist they’d like to use to try to beautify it and make it handicapped accessible.”

Meadors said the memorial pulls in a lot of visitors.

“I don’t think people recognize how many people do come in and go out here and have their picture made or place their hand on the monument,” Meadors said. “There are quite a few people that come into Harlan to just be there in memory of their lost loved ones.”

Meadors told the panel a group of citizens including Shelby Wilson, Mark Miracle, John Meyers and others have ideas on the subject.

“They’ve just got some ideas on how we can clean it up and make it more presentable,” Meadors said.  “The main thing is to make it handicapped accessible. Evidently, we had a lady here from out of town, she just wanted to go up and have her picture take with her hand on the monument and she couldn’t get up there.”

Wilson also made some suggestions concerning the memorial.

“I’d like to see some new shrubbery put around it,” Wilson said. “The blocks of coal are deteriorating; I’d like to put new coal around it. New edging and a handicapped ramp.”

Wilson stated the monument is important for a large number of people.

“If you’ve ever worked in the mines, that monument means a lot to you,” Wilson said.

Wilson said the names approximately 1,000 miners who have died in the county’s coal mines appear on the monument.

“Sadly, we’re getting ready to add a couple names to that monument,” Mosley said. “We lost a miner earlier this year – James Brown – just a couple of months ago on Cloverfork. Certainly, it means a lot to every family that’s lost someone who’s name is on that wall, but it means a lot to everybody who’s had family that worked in the mines, because you’re thankful your family member’s name isn’t on that wall.”

Mosley indicated the Harlan County Fiscal Court would be willing to assist in the upgrading and beautification the of the monument, asking Meadors if the cost of the project had yet been determined.

Wilson responded the costs had not yet been calculated.

“We can get together and get that back to you,” Wilson said. “Right now, we’re just looking for support from you guys today.”

Mosley suggested the court would support such a project.

“I don’t think you’ll find anybody here that’s opposed to any ideas to beautify that or anything that’s around this facility,” Mosley said. “We recognize, as the Mayor eluded to, not only is this an important monument in our community but it’s somewhat of a tourist attraction. People come here because they had a family member that was killed in the mines and to see that wall and educate their children and grandchildren about the coal heritage of our area.”

Mosley advised the group to put a plan together and bring that back to the court.

“We want to help,” Mosley said. “We’re certainly supportive of the concept.”

In other Fiscal Court activity:

• An ARPA agreement for Leo Miller and Associates for the 2425 sewer extension project was approved.

• The court granted permission to apply for additional funding through an Emergency Management Performance grant.