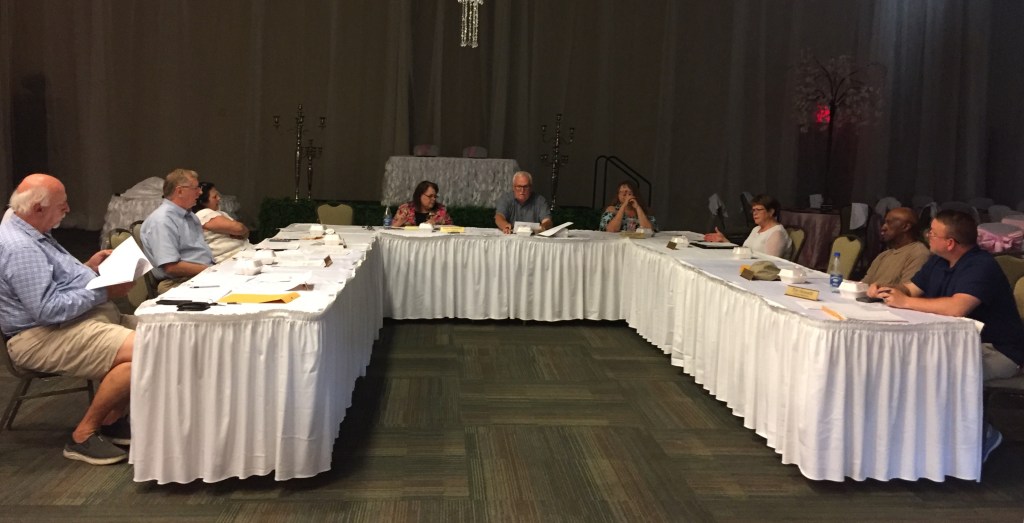 The Harlan City Council held their regular meeting for the month of June recently, discussing multiple items including the budget for the next year/Photo by Joe Asher

The Harlan City Council approved a first reading of the city’s budget for the next fiscal year during their regular June meeting.

Harlan City Mayor Joe Meadors brought the subject up to the panel immediately after calling the meeting to order.

“We’ve got quite a bit to cover, so lets jump right into it,” Meadors said. “I sent you the budget Friday afternoon, and hopefully you’ve had a chance to look at it.”

Meadors informed the council the new budget contains a $1 per hour raise for the city’s police officers.

“We’re trying to keep a well trained, professional police force employed,” Meadors said. “To do that, you have to pay them. I think it behooves us to do that, because it’s in our best interest.”

Meadors also told the council other employees would be receiving a $.50 per hour increase.

“All the other hourly employees will be getting 50 cents,” Meadors said. “This is a bare bones budget. We’re going to have to stick to this.”

According to Meadors, extra expenditures such as overtime will have to be closely watched.

“We’ve tried to do a lot to clean up this town, and keep it clean,” Meadors said. “That’s required quite a bit of labor and a lot of overtime. But that overtime is going to have to be cut back.”

Meadors also mentioned some funding the city has received.

“We have not touched any of our ARPA (American Rescue Plan Act) money,” Meadors said. “We do have some large expenditures that we’re going to have to look at.”

Meadors said some of the money may be used for an incentive program.

“We had talked about putting $25,000 into a downtown incentive to encourage new business owners and new building owners to clean up their property.” Meadors said. “We haven’t done that, but that’s something we can do sometime this year if you all want to do it.”

The council were also advised a large piece of city equipment is in need of repair.

“We had a backhoe go down last week,” Meadors said. “We’re going to get it fixed.”

According to Meadors, the backhoe is needed on a daily basis.

“Year round, we use that backhoe every day,” Meadors said. “We’ve just about worn it out.”

Meadors said some of the ARPA money may be put toward the backhoe situation. He also mentioned possibly using approximately $15,000 of ARPA funds for playground equipment.

Meadors also updated the council on a settlement the city is expecting from a legal action concerning opioids.

Following some further discussion, the council approved the first reading of the budget.