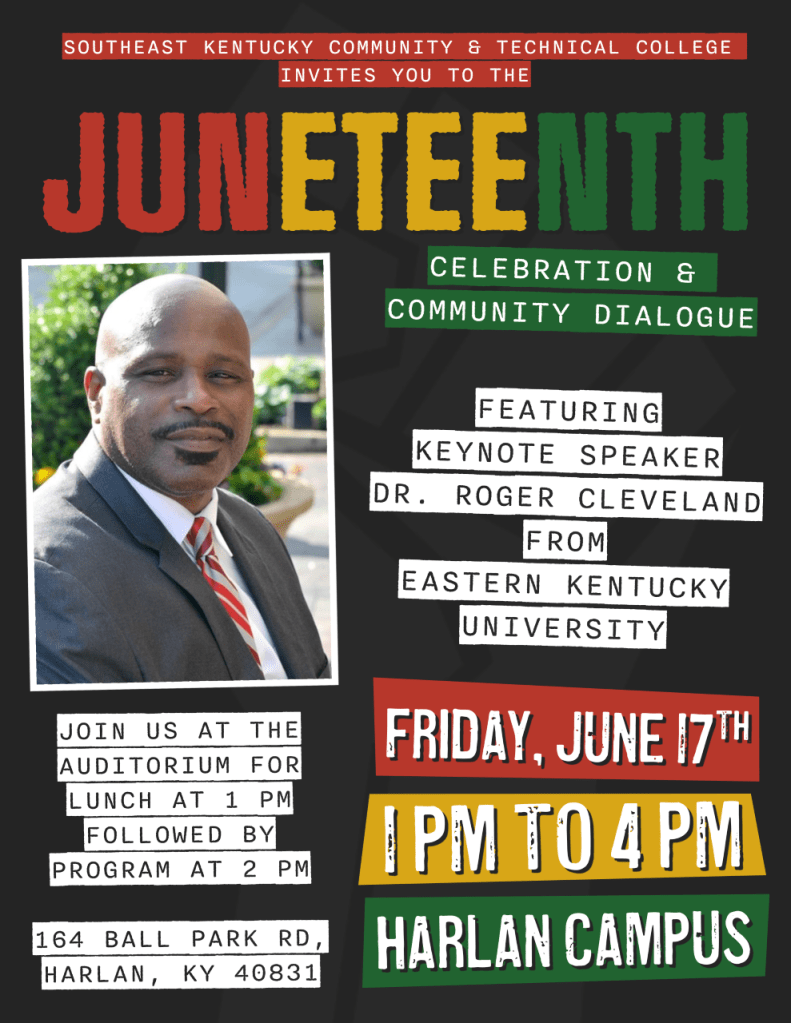 Southeast Kentucky Community and Technical College (SKCTC) is will host an event at their Harlan campus on Friday in observance of the newest federal holiday, Juneteenth.

Amy Simpson, Director of Public Relations at SKCTC, explained some aspects of the upcoming event.

“It is a community event that will be held in the auditorium on the Harlan SKCTC campus,” Simpson said. “We have a keynote speaker – Dr. Roger Cleveland from Eastern Kentucky University – among his topics will be the history of Juneteenth and what the day means.”

According to the United States Government Publishing Office’s website at/www.govinfo.gov, Juneteenth marks the day Federal troops arrived in Galveston, Texas, on June 19, 1865, to ensure all enslaved people were freed. This occurred approximately two and a half years after the Emancipation Proclamation went into effect in January, 1863. In 2021, President Joe Biden signed into law the Juneteenth National Independence Day Act designating Juneteenth as a federal holiday. Juneteenth is the first federal holiday to be approved since 1983, at which time Martin Luther King Jr. Day was approved.

Simpson ran down some of the details of the program, including some topics Cleveland will be addressing.

“He’s going to talk about the significance of Juneteenth,” Simpson said. “He’s also talking about ways to open up communication within the community and making sure that the college as well as business leaders and members of the community can all have a conversation about the importance of diversity and inclusion, and what those things actually mean.”

Simpson stated there will be a question and answer period following Cleveland’s presentation, which will hopefully open up a dialogue concerning the reasons behind the holiday.

“It’s emerging around the country as an important holiday,” Simpson said. “This year, SKCTC is going to give Monday, June 20, off in observance.”

The Harlan campus was chosen to host the event due to the central location of the facility.

“(The Harlan campus) is kind of the hub of all of our campuses as far as location goes,” Simpson said. “That way, people from all the SKCTC campuses can attend if they wish.”

The event will be admission free and open to the public.

“This is intended to start a conversation in the community about an important subject; inclusion,” Simpson said. “Hopefully, it will be the beginning of a continuing conversation.”

The event is scheduled from 1 p.m. to 4 p.m. at the SKCTC Harlan campus located at 164 Ball Park Rd.