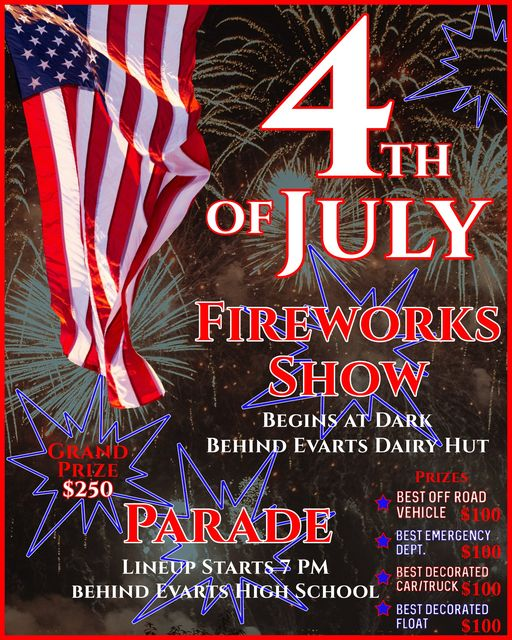 The city of Evarts will be hosting their annual fireworks display on July 4, with plans in the works for a celebration to be enjoyed by all ages.

Evarts City Clerk Kristi Lamb went over some of the plans on Friday.

She pointed out Evarts Tourism has yet to finalize a few of the details, however all the specifics of this year’s event will be ironed out soon.

While some details may still be in the works, the annual event will contain familiar activities most in the area look forward to each year.

“They’ll have the parade and the fireworks,” said Lamb.

The parade participants will began lining up behind Evarts High School at 7 p.m. on July 4.

Lamb clarified this year’s fireworks show will be similar to past 4th of July events, but there will be one major difference from last year’s event.

“Last year we had dual fireworks shows, one on both sides of town, to celebrate Evarts’ 100th anniversary,” Lamb said. “This year, we’re only going to have the one firework show behind the Dairy Hut like we’ve always done in the past.”

Lamb mentioned there are many good locations to observe the fireworks display, including anywhere along Kentucky Route 38 near the Dairy Hut and the Evarts City Hall area.

The Dairy Hut is located at 119 South Main Street in Evarts just across the street from the Evarts Marathon/Mini Mart.

The fireworks display will begin just after dark following the parade.