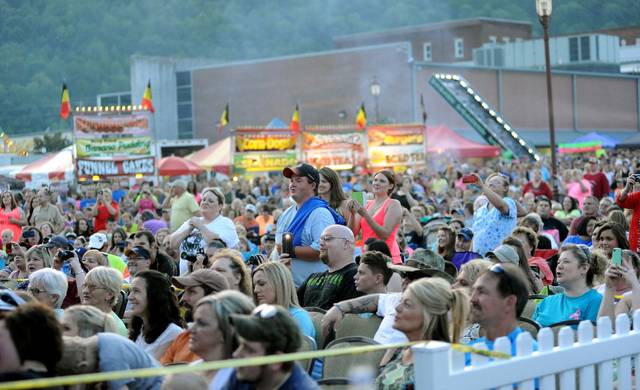 The Poke Sallet Festival kicks off Thursday, with music, games, vendors, food and fun on tap over multiple days in downtown Harlan, with the final evening on Saturday being capped by Dressed to Kill, a KISS tribute band, bringing a full rock and roll show complete with pyrotechnics to the stage.

Mike Collins, who plays the role of KISS bassist Gene Simmons, talked about the band’s return to the Poke Sallet stage.

“I started the band back in 2007,” Collins said. “We work hard to deliver a spectacle, something that people will remember, aren’t expecting, and goes beyond what they think a local act can do.”

Collins explained the act started out as a one-time event but grew from there.

“We actually started in Harlan,” Collins said. “The people that saw that first show were blown away by it, it just kept growing and here we are 14 years later.”

The tribute act has even performed for KISS founder Gene Simmons, Collins said.

“We went 14 years doing everything you can think of…Then 2020 hit and the band was knocked to a standstill,” Collins said. “Even after COVID restrictions started letting up, work kept us from going back full throttle.”

Collins said there have been a few shows since 2020, but the band was thrilled when the request came to play the Poke Sallet Festival.

“It had been since the Harlan County Bicentennial that we played (in Harlan),” Collins said. “The bicentennial show was amazing, the people came out in droves, everybody was having a great time.”

“I mentioned it to the guys, they had to work around their schedules a bit, but they made it work,” Collins said. “We’re glad to be back.”

Dressed to Kill models their show after the full KISS concert experience, with band members portraying the original KISS while the set list covers the entire decades-long career of the legendary rock band.

“We dress for the 1977 ‘Love Gun’ era,” Collins said. “The set list contains the full range of songs from every area. We don’t lock ourselves down to one era.”

Dressed to Kill is planning a 22-song set for the Poke Sallet Festival, which will clock in at approximately two hours of material.

“It’s our hometown,” Collins said. “We’ve gotta pull out all the stops. We don’t get to do it as much as we used to, and we’re just going to revel in the joy of what we do and doing it in our hometown.”