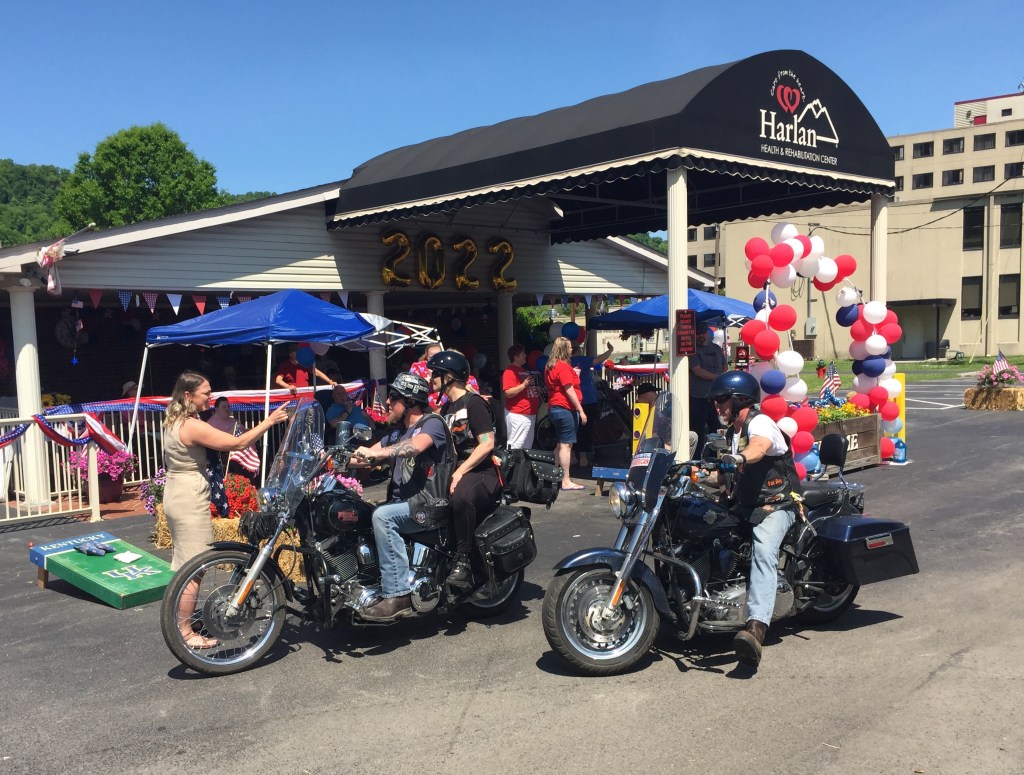 Residents of the Harlan Health and Rehabilitation Center recently spent some time taking advantage of Naional Nursing Home Week by getting out in the Spring weather for a little rest and relaxation courtesy of the facility and organizations including the Southern Brothers Motorcycle Club.

“This is National Nursing Home Week,” Bolin said. “We celebrate every day throughout week. The theme is togetherness and family, things like that. Today, we are celebrating “Red, White and Blue Day.”

According to Bolin, the Harlan County Honor Guard were a big part of the day’s activities.

“They presented Harlan Health and Rehab with a flag in memory of all the veterans that have lived here and are living here as well as the staff members who work here that have served in the military,” Bolin said. “They performed a 21-gun Salute.”

Bolin noted one resident is a World War II veteran.

She said participating groups included the VFW, the Southern Boys Motorcycle Club, a local Jeep club, the Harlan County Honor Guard and others.

“We’ve got a community parade that we’ve been working on with Harlan County Emergency Management,” Bolin said. “There will be fire trucks, lights and sirens, ambulances and police cars. We also invited all the families of the residents that live here to be a part of the parade.”

“Every year it’s a different theme,” Bolin said. “We try to get the residents involved. We’ve had games, food, we’ve had the Conservation Office do a ceremony…we’ve had volunteers playing music on the porch, we’ve had gospel singing, and more.”

Hensley added there was also a barbecue planned for the residents, staff and family. She expressed appreciation that circumstances once again allow for these events to take place.

“We are very grateful to the community for volunteering,” Hensley said. “We’re happy to be open again so our families can come in and our residents can get out and enjoy their family. And we’re thankful to God.”