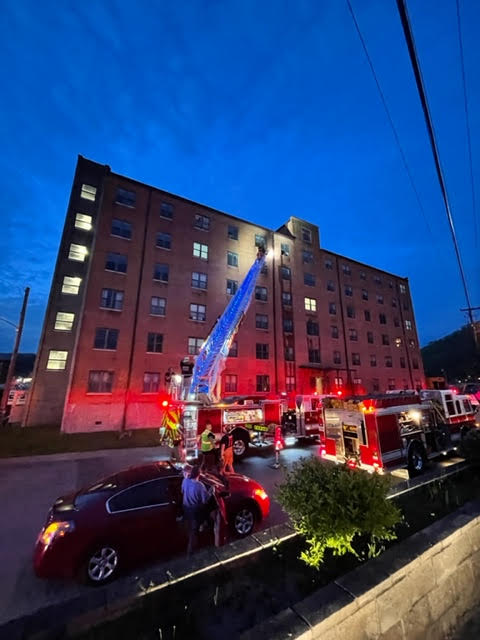 According to Harlan City Assistant Fire Chief James Billings, the call came in at approximately 8 p.m. on Friday.

“Harlan City Police received a call at 8:06 p.m.,” Billings said. “The fire alarm and sprinkler system had been activated.”

When crews arrived on the scene, smoke was emitting from a 6th floor window, Billings said.

“It could be seen from River Street,” Billings said.

Billings said the Harlan City Fire Department, Sunshine Volunteer Fire Department, Harlan City Police, LiGuard and Harlan County Emergency Management as well as emergency medical personnel were on scene. Many government officials and local residents also arrived at the scene to assist in any way they could.

“I’ve never seen that many people helping on a fire,” Billings said.

Harlan County Judge-Executive Dan Mosley was at the scene.

“The call come shortly after 8 p.m.,” Mosley said. “They dispatched out the fire department and several other agencies for backup. I got down there at about 8:50 p.m. the police, fire and EMS folks did a great job getting all the residents out very quickly.”

Mosley mentioned how the fire may have started.

“It’s my understanding from Harlan City Fire Chief Linette Hutchison and Harlan County Emergency Management Director David McGill the fire started in one apartment on the 6th floor,” Mosley said. “There was some water damage that happened to other apartments as a result, but most of the residents were able to go back that night to their apartments. The Red Cross was assisting with placing those that could not.”

“The first responders did an amazing job getting people out of there,” Mosley said. “There were a few people that were hospitalized due to smoke inhalation or some burns, but for the most part everybody was OK. Several people sought treatment at the E.R. because they had oxygen related issues, so they went (the the hospital) as a precaution. It could have been a really bad situation, we’ve seen buildings in this town go up quickly, and the quick response kept that from happening.”

The cause of the fire is still under investigation.