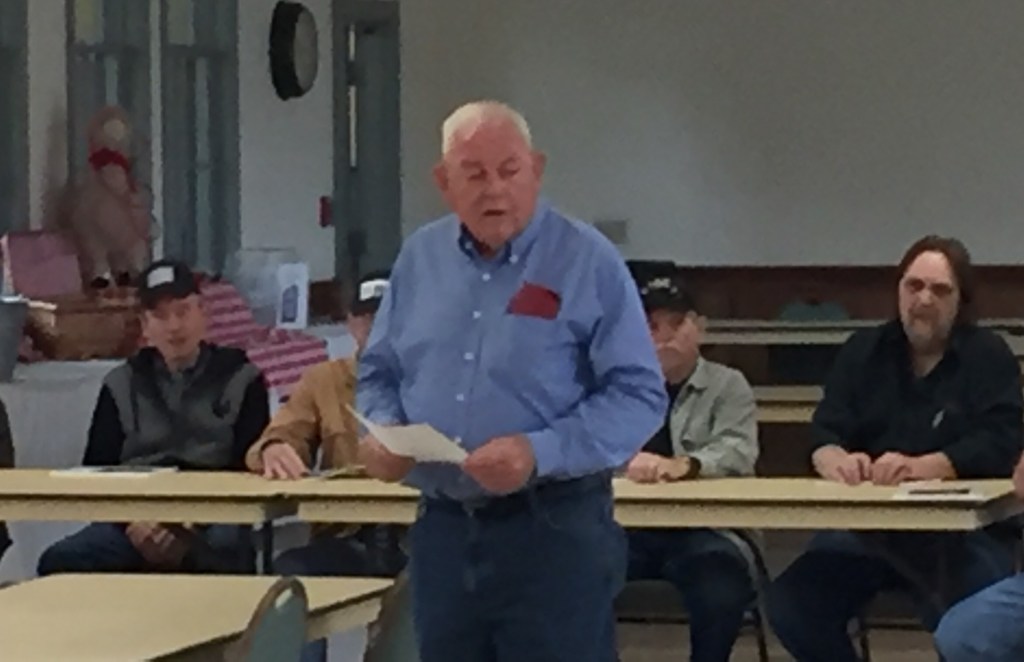 Ronnie Oplinger, President of the Former CSX and L&N Employee Retirees Group, addresses a roomful of retired railroaders during a recent event/Photo by Joe Asher

Railroading is a profession the people in Harlan County are very familiar with, as a large percentage of coal was transported from the county by train over the years. The men and women who spent their professional lives working to move the coal met up at the Harlan County Extension Depot recently to reminisce and catch up.

Ronnie Oplinger, President of the Former CSX and L&N Employee Retirees Group, talked about the gathering.

“We’ve been doing this at least 15 years,” Oplinger said. “I retired in 2004, and shortly after that we got to together and decided we wanted to have a group of retirees.”

Oplinger explained the group was originally going to meet quarterly.

“We found out that due to circumstances we don’t get to meet as much as we planned,” Oplinger said. “We meet at least two or three times every year.”

There are usually at least 40 retired railroaders who show up at the events to catch up with each other and share information, stories and some food.

“We’ve got all kinds of railroad employees here,” Oplinger explained. “We’ve got track men, we have signal men, brakemen, conductors and engineers, clerks, anybody who worked for CSX Transportation or L&N is welcome to come.”

Oplinger mentioned retired railroaders have turned up at the meeting from many different areas.

“We’ve all got a lot in common,” Oplinger said. “We speak the same language. Railroaders have a slang that nobody else has, and everybody’s comfortable talking to each other.”

There are several reasons for the group’s existence.

“I worked 39, 40 years with some of these folks,” Oplinger said. “You don’t mark them off and forget about them. We’re all really close. On the railroad, you spend so many hours with each other, I spent more time with them than with my wife and family.”

He explained that once retired, railroaders seldom leave the life completely behind.

“It’s something that gets in your blood,” Oplinger said. “You don’t get it out of your system, that’s the reason we see each other all the time.”

Ron Flanary, who attended the event, brought some items of interest for the attendees to enjoy.

“There’s never been to my knowledge a formal program, I brought a few things over, models, photographs, and I gave an update on the historical society,” Flanary said. “But the agenda, these guys just talk to each other. They are genuinely excited to see each other and talk about old times. They also always pay tribute to the guys that have passed away since the last meeting…they just like to see each other, and that’s what brings them back every time.”

The group is open to all former employees of CSX Transportation or the L&N Railroad, or any other railroad or railroad related position.

There is no admission, fee or cost to take part.