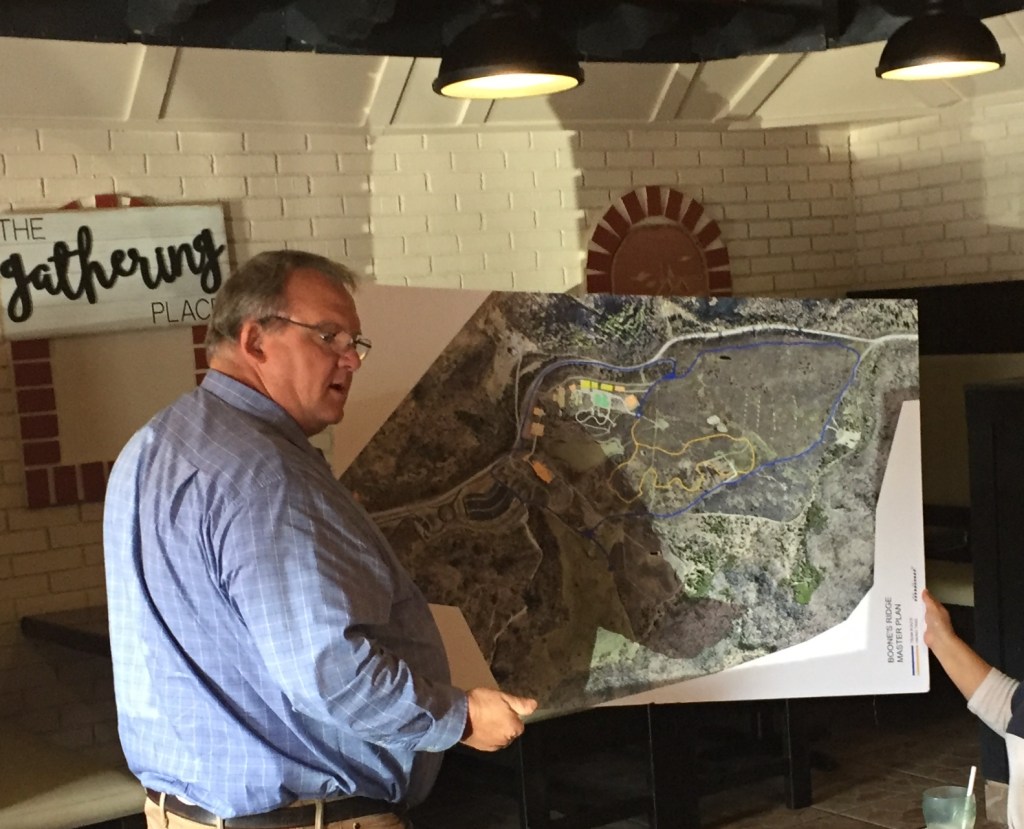 The Harlan County Chamber of Commerce heard an update on the Boone’s Ridge Wildlife Center project during their April meeting.

While the Boone’s Ridge project is located in Bell County, it is expected to have an impact on businesses in Harlan County as well. The project is underway across what has been commonly known as the “Bridge to Nowhere,” which is connects to US 119 in Bell County.

Boone’s Ridge representative David Ledford updated the group on the status of the project.

“The funding for the building was a major challenge,” Ledford said. “We got it done…we actually started last spring, early summer. The building is under a roof now, it’s two stories.”

Ledford said there have been additional features added to the project.

“One positive result of all the delays we’ve had is it gave us an opportunity to really learn and dig deep on what we didn’t know about the tourism business,” Ledford said. “We’ve had some real opportunities to learn. One of our best sources of information is The Ark Encounter in northern Kentucky.”

“They’ve been a tremendous help,” Ledford said. “One thing we learned is we can’t just be a place where somebody goes in a building, sees some things and exits. So we’ve added a lot of features and a lot of different things for people to do.”

Ledford pointed out the market for Boone’s Ridge will be the drive tourism industry.

“For example, a family of five from Indianapolis is on their way to Hilton Head,” Ledford said. “They’ve seen our advertising, they’ve seen our marketing, and they realize they can drive to Knoxville and turn left on I-40 or they can take 25E all the way to I-81 and spend a day at (Boone’s Ridge). That’s going to be one of the classic profiles for our customers.”

“We’re going to have one section dedicated purely to birds,” Ledford said. “There will be a lot of technology in there…there are 56 million bird watchers in the United States. The demographics of serious bird watchers is very high. An average outdoor enthusiast tourist spends about $150 per day on a vacation. Bird watchers spend $210 a day.”

“That’s a market that we want to capture,” Ledford said. “Fortunately, the habitat at (Boone’s Ridge) is such that we get an enormous variety of birds. We’ve got birds that nest on tundra near the Arctic Ocean that migrate and have been documented on the property stopping during migration.”

Ledford added the facility will also feature other attractions such as an art gallery, a restaurant capable of seating over 200 people inside, shopping, a world class petting zoo, a virtual reality exhibit, a butterfly house, an accessible nature trail and more.

“We’re going to have the biggest, most awesome playground for kids in the state of Kentucky,” Ledford said. “We’ve got a consultant working on it.”

Ledford added there will be a tram to take people throughout the approximately 500 acre attraction.

For more information and a countdown to the expected opening date, go to the Boone’s Ridge website at https://boonesridge.com/#home.