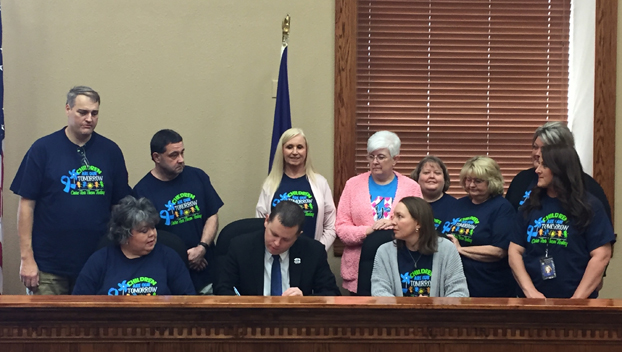 The proclamations were signed in the Harlan County Courthouse, with a small crowd in attendance.

“I appreciate what you all do with the youth service centers and Americorps,” Mosley told the crowd. “I appreciate you all being here.”

Mosley mentioned the pinwheel display on the courthouse lawn, which is currently in place to bring awareness to help prevent child abuse.

“A lot of the parents come in and ask if their child can take one of the pinwheels,” Mosley said. “Usually, they’ll wait a couple of weeks before they start asking, but it’s good to see kids enjoying them, and understanding they’re bringing awareness to this very important issue.”

Mosley mentioned there are many activities scheduled around the county during the next month to help shine a light on the important issues of child abuse and sexual abuse.

The Child Abuse Prevention Month proclamation states Child Abuse Prevention Month is recognized in Kentucky as well as the rest of the United States, and preventing child abuse and neglect is a problem that requires the attention of the people in the community. Scientific studies document a link between abuse and neglect of children and a wide range of emotional, psychological, physical and behavioral disorders.

The proclamation further states all citizens should become involved in strengthening families and enabling them to raise their children in a safe environment.

The proclamation designating April 6 as National Service Day states service to others is a hallmark of the American character, and central to meeting challenges. Elected leaders in the United States are increasingly utilizing volunteerism and nations service as a cost-effective tool for meeting the needs of their communities.

“AmeriCorps and Senior Corps participants address the most pressing challenges facing our communities, from educating students for the jobs of the 21st century to fighting the opioid epidemic, to responding to natural disasters, to supporting veterans and military families,” reads the National Service Day Proclamation.

Both proclamations were signed by Mosley on Thursday.