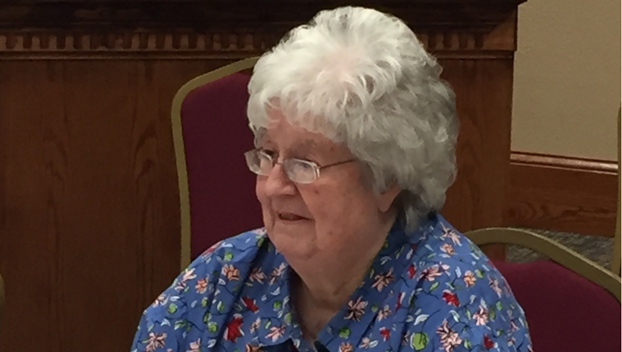 Harlan County Clerk Donna Hoskins, who serves as chair of the Harlan County Election Board, discusses aspects of the upcoming May primary election during a recent meeting. (Photo by Joe Asher)

The Harlan County Election Board met recently to discuss the upcoming May primary election including early voting and the selection of election officers.

Harlan County Clerk Donna Hoskins, who chairs the board, called the meeting to order

According to Hoskins, Harlan County requires 168 election officers, with an equal number of Democrats and Republicans required at each of the county’s precincts on election day.

“We are going back to 32 precincts,” Hoskins noted.

Mail in absentee voting is available, however, to cast an absentee ballot one of the following requirements must be met:
• Unable to appear due to disability, illness or age;
• A member of the Armed Forces confined to a military base;
• Dependent of a member of the Armed Forces;
• Temporarily reside outside the state, but are eligible to vote in Kentucky;
• Student who temporarily resides outside of the county in which they are registered;
• Person who is incarcerated and charged but not yet convicted of a crime;
• Person qualified under the address confidentiality program with the Secretary of State office;
• Person whose employment location requires them to be absent from the county all hours and all days that excuse and no excuse absentee voting is conducted.

Applications to cast an excused mail in absentee ballot may be submitted through the online portal at www.govoteky.com from April, 2, until May, 3. The applicant must meet one of the valid requirements listed above. Applications may also be made at the Harlan County Clerk’s Office.

Hoskins also updated the board on election school, which is a class attended by election officers providing instruction on the procedures and processes they will need to perform on election day.

“Election school is May, 4, at the Harlan campus of Southeast Kentucky Community and Technical College,” Hoskins said. “We’ll have two sessions, at 4 p.m. and 6 p.m.”

Hoskins said those picked to serve as election officers will receive notification via mail in April.