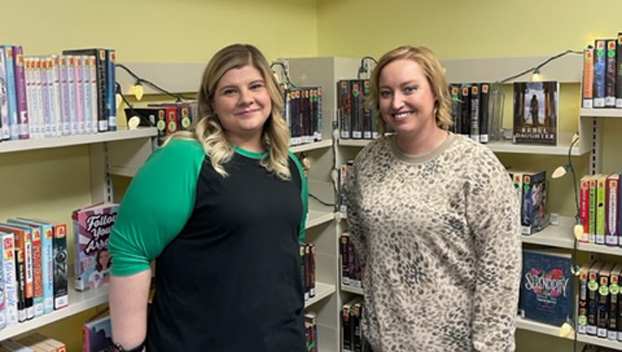 Libraries are an important part of every community. Folks like Children's Librarian Elizabeth Lewis (left) and the library's Adult Programmer Brandi Shipman make the Harlan County Public Library a good place to read a book or create crafts, maybe even dance. Make plans for a very special event at 2 p.m. Saturday, March 12 at the Harlan County Library. Author Cordellya Smith will be visiting for a reading of "Otter's Coat: The Real Reason Turtle Raced Rabbit" that will be followed by a meet & greet with the library's patrons. Help welcome Cordellya to the library and experience this exciting opportunity. (Photo by Miles Layton)

I dropped by the library downtown the other day.

Learned that Bryan W. Whitfield Jr. Library recently opened for regular business — first time since the pandemic started — for folks to come in person so as to check out books and such. That’s good news because a library is an integral part of any community.

Next, I’m told some Appalachian State University students visited Harlan in recent days. I was told they visited places near and far including the museum to learn more about the county, Knobby Rock and did some cleaning, picking up trash.

In other news, I got to get on the stick about planning and writing about local political candidates because before you know it, the May primary will be here. We’ll probably be running a list and more to introduce the candidates.

Candidates or folks with tips — please reach out to miles.layton@winchestersun.com

Yes, I have a Harlan email address, but rather than checking three or four different email addresses, I’m just going to stick with one. Remember when we didn’t have email? Back then, no one got up at 4 a.m. on a Tuesday to read emails, scroll through Facebook until sunrise — nowadays… eh… things are a bit different.

In other news, we’re going to start running a history feature because I want to know more about Harlan’s past so I can be more informed not only as editor, but because I’m curious and want to share these stories with my family.

In order to understand the present, one must have a good grasp of the past.

For example, before “Black Gold” was mined from the mountains of Harlan County, before the large coal companies moved in this area of Kentucky, the only way into the county was by horseback or wagon.

The L&N Railroad had reached Middlesboro and the only road — if one could the wagon path a road — leading into Harlan County from Pineville into Harlan County was a long and hard undertaking, according to an article by W.C. Stump that appeared in the Harlan Enterprise in March of 1998.

Most dry goods and supplies that entered Harlan County came from Virginia via the “Hagen Trail.”

In 1902, Mount Pleasant, now referred to as “Harlan Town”, had no idea that the county was about to change quickly and drastically during the next few years.

Few, if any, knew that this change would take place as the result of one man’s determination to conquer an obstacle that would have been deemed impossible by most contemporaries of his day and time.

That man was Thomas Jefferson Asher and the obstacle was the building of a railroad.

The Asher family settled in the Bell County area of southeastern Kentucky prior to the American Revolutionary War.

Long-story-short, when Varilla Howard married Asher in March of 1870, their first possession was
$49 in cash, a two-cap step stove, a bed, a small parcel of land with a log cabin which had been a gift of the bride’s father.

These possessions became the nucleus of the Asher Land and Coal empire.

Later in 1890, a sawmill operation was founded by Rennebaum & Slawson on the Cumberland River at Wasioto.

Originally, the mill used a circular saw and produced around 18,000 board feet of lumber per day.

This operation, including the mill, was later purchased by Asher by the mid 1890s.

With Asher’s facility located strategically to both the river and the railroad, he was able to control most of the timber up the Cumberland River and to its tributaries, the Poor Fork, Clover Fork and Martins Fork. Within the next few years, Asher’s company acquired 15,000 acres of land that was heavily timbered, Stump wrote.

However, the property’s real asset was not seen as there were several seams of coal that lay underneath the acreage.

Later, Asher appealed to L&N Railroad Company to extend their trackage up to the Cumberland River and into Harlan County. Railroad said it was not ready, but Asher would not be the type of man to give up.

Asher used his own money to build a rail line starting at Harbell, the last point on the L&N Railroad on the Cumberland River and continued that line up the river from Yellow Creek to Tom’s Creek, which was the beginning of the railroad into upper Bell County and all of Harlan County.

Construction began in the fall of 1907 with the Wasioto and Black Mountain Railroad forming with Asher as president in 1908.

The company known as T.J. Asher and Sons was absorbed and capitalized into the Asher Coal Mining Company.

With the transformation from lumber to coal, an era passed. Life would never be the same again in Harlan County, Stump wrote. Coal would be the driving force that would control and rule lines of the people to this very day.

Lastly, anyone with news tips please reach out to me at miles.layton@winchestersun.com or call 252-302-1288.