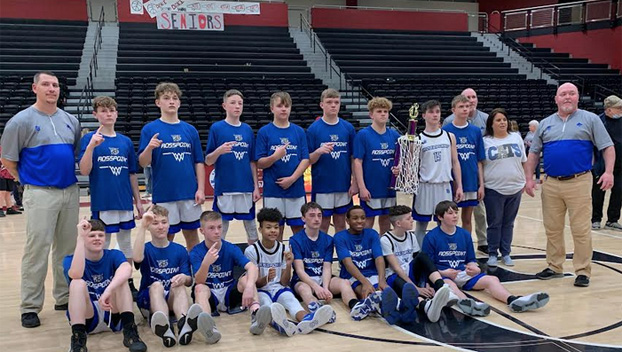 Rosspoint claimed the seventh- and eighth-grade basketball championship on Thursday defeating James A. Cawood 52-50. It was the Wildcats' 10 county title since 2002.

Gage Bailey and Jayce Brown combined to score 29 points and most of them in the second half as Rosspoint defeated James A. Cawood 52-40 win claim the Harlan County Middle School Basketball Tournament at HCHS on Thursday.
The Wildcats were runners-up the last two seasons.
The Trojans took a 9-3 advantage after one quarter and went into the locker room ahead 17-13.
Bailey poured in 12 points in the third quarter as Rosspoint led 34-29.
Brown fired in 11 points in the final quarter to give the Wildcats the victory.
Bailey paced Rosspoint with 15 points while Brown scored 14. The Wildcats also got seven points from Gunner Burkhart and six points from Chance Sturgill.
Landon Brock powered JACES with a game-high 16 points. Brennan Blevins contributed 14 points. Bradon Clay scored seven.
“Hats off to JACES. They came in with a great game plan and it threw us for a loop in the first half,” said Rosspoint coach Hobie Boggs. “We made some adjustments at halftime and came out playing our game. I believe we wore them down.”
— — — — —
The Evarts Wildcats needed overtime in the consolation game to claim third place, winning over Cawood 44-43.
Ashton Sizemore powered Evarts with 24 points. Aiden Reynolds scored 11.
Ethan Shular led Cawood with 15 points. Brady Smith finished with 12 points while Brayden Smith tossed in 10.
— — — — —