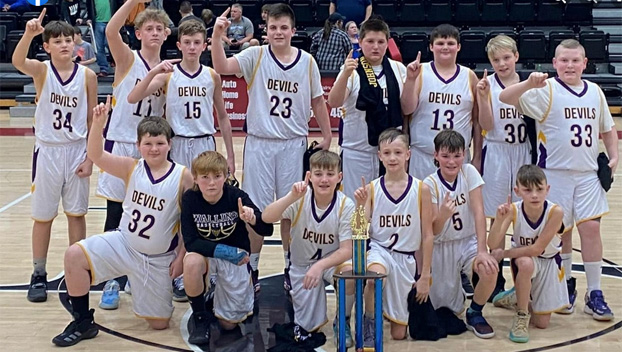 Congrats to Wallins Elementary for its 34-27 victory over Rosspoint for the Harlan County Fifth- and Sixth-Grade Tournament Championship at Harlan County High School. (Submitted photo)

Wallins Elementary used a 15-6 outburst in the third quarter on Saturday to win 34-27 over Rosspoint for the Harlan County Fifth- and Sixth-Grade Tournament Championship at Harlan County High School.

Ryan Day and Tanner Daniels each scored six points for the Purple Devils in the third period as Wallins trailed 13-11 at halftime.

The Devils took a 26-19 advantage into the fourth quarter.

Both the Wildcats and Devils scored eight points in the final period.

James A. Cawood edged Evarts 49-47 in the county’s consolation game on Saturday.

Evarts’ Sam Carr and Tanner Russell each got into early foul trouble.

Noe-Sanders and Maggard each nailed three 3-pointers. Bargo and Smith each hit one.

Engle had two treys for the Trojans.

The Wildcats connected on nine of 11 free throws while JACES were five of 13 from the free throw line.