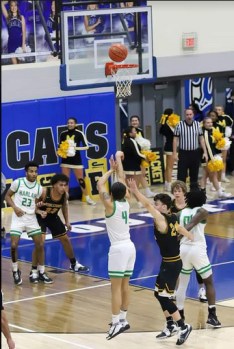 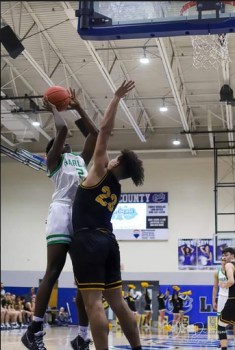 Harlan's Will Austin went to the basket as Middlesboro center Jay Tyler West guarded. Austin scored nine points and West contributed six for the Jackets. Harlan advanced to the district finals with a 75-40 victory. (Photo by Jon Dickenson)

LOG MOUNTAIN — With 5.6 seconds remaining in overtime on Tuesday, Bell County junior guard Dawson Woolum completed a three-point play and allowed the Bobcats to advance to the 52nd District Tournament championship with a 55-54 win over Harlan County.

“I’ve been doing this a while, and this is probably the biggest win, including the regional championship (at North Laurel), that I’ve been involved in because this group of kids has been striving to get to this point. We’ve had a lot of heartbreaking losses, but they stayed the course. I’m happy for these seven seniors,” Bell County coach Brad Sizemore said. “A lot of people probably didn’t think we had a chance to win and rightfully so because Harlan County has a great team with great players and one of the best coaches in the state of Kentucky. I have a tremendous amount of respect for what they do. We could have folded several times, especially in overtime. Our guys just keep believing and making big plays. We feel this is our year to get something done, and I’m really happy for these kids. ”

Bell County was led in scoring by Woolum’s 22-point effort, hitting nine of 13 from the field. Cameron Burnett and Dalton Stepp each tallied 12 points.

The Black Bears closed their season with a 19-11 record.

Noah had three baskets for six points and Daniel Carmical nailed a 3-pointer as HC took a 13-5 advantage after one quarter.
“They played great defense on us in the first quarter. We dug a hole and missed some shots,” said Sizemore.

Bell County used a 20-5 spurt in the second period as Woolum scored 10 points while Stepp and Burnett knocked down five points apiece. The Bobcats led 25-18 at halftime.

“It all comes down to making shots. When we came in at halftime we were talking about them shooting 61 percent in the first half and we were shooting 40 percent and both of us were shooting layups. We missed a lot of shots right around the rim,” Harlan County coach Michael Jones said.

Carter McCune scored all five of his points in the third quarter and Woolum added four points as Bell went into the fourth period leading 39-26.

Noah poured in nine points and Swanner scored eight in the fourth period. Huff contributed seven points and Jackson Huff added a basket in the quarter.

Noah had a jumper to give HC a 54-52 edge until Woolum’s game-winner points in the closing seconds of OT.

“I’m proud of the kids for battling back and giving us a chance to win in overtime,” said Harlan County coach Michael Jones. “This loss in overtime is on me 100 percent. I don’t want anybody to blame any of our kids. When Jonah got the steal, I should have called timeout.”

Sizemore dedicated the win to one of his coaching colleagues.

“One of my former assistants at North Laurel, Bobby Bowling, passed away (recently) after a battle with cancer,” he said. “I told the guys in the office today that I felt if there was a way we would pull it out for him. I’m happy we got it done for him because I know how much basketball meant to him.”

Harlan County loses only one starter in Jackson Huff to graduation and should be among the region’s top teams again next season.