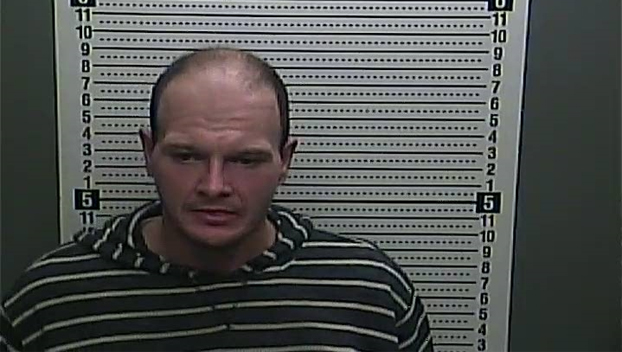 Neil Creech, 33, of Partridge was arrested on Jan. 31 on an indictment for possession of methamphetamine from a warrant by Cumberland City Police Officer Stewart.

A Partridge man has been indicted for possession of methamphetamine.

Neil Creech, 33, was arrested on Jan. 31 on an indictment warrant by Cumberland City Police Officer Stewart.

According to the indictment handed down by the grand jury on June 30, 2021, Creech was in possession of methamphetamine on or about Aug. 1, 2019.

The citation issued at the time of Creech’s Aug. 1, 2019 arrest states police made contact with Creech, who was standing in a breezeway of a building in Cumberland. Creech consented to a search, and produced a bag containing a crystal-like substance believed to be methamphetamine.

Creech was also found in possession of a small brown glass bottle containing a crystal-like substance believed to be methamphetamine.

Creech was indicted on one count of first-degree possession of a controlled substance (methamphetamine). He was lodged in the Harlan County Detention Center on a $5,000 full cash bond.

In other police activity:
• Amy Renee Allen, 36, of Dayhoit, was arrested by Harlan City Police Officer M. Saylor on Feb. 2. According to the citation, Saylor performed a traffic stop on a vehicle of interest in a separate case. Allen was in the back seat of the vehicle. Allen was arrested due to an active indictment
warrant. Following her arrest, Allen was found in possession of a clear baggie containing a crystal-like substance and two syringes.

Allen was charged with first-degree possession of a controlled substance (methamphetamine) and possession of drug paraphernalia. She was lodged in the Harlan County Detention Center.

• Howard Huskey, 33, of Baxter, was arrested on Thursday by Kentucky State Police Trooper Caldwell. He was charged with first-degree possession of a controlled substance (methamphetamine), tampering with physical evidence, operating a motor vehicle under the influence, first-degree fleeing or evading police, driving on a DUI suspended license, failure to wear seat belts, failure to produce insurance card, no registration plates and no registration receipt. Huskey was lodged in the Harlan County Detention Center