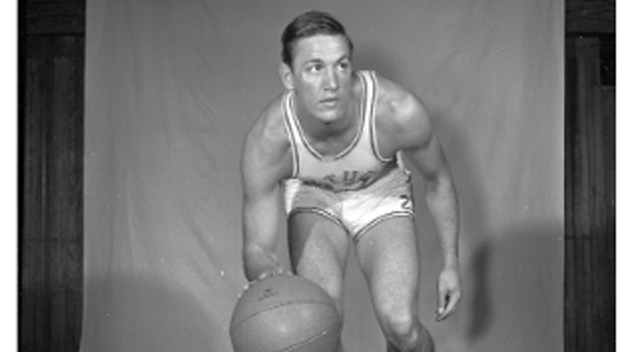 Wallace "Wah Wah" Jones helped lead the Green Dragons to the 1944 state prep title. He was all-stater in football, basketball and baseball. (Photo/University of Kentucky)

Harlan High School’s gymnasium was named after the school’s most decorated athlete Wallace “Wah Wah” Jones during a ceremony between double-header basketball games on Tuesday.

An All-stater, Jones holds Harlan County and 13th Region records for most points in one game with 68 against Artemus on Nov. 30, 1943. Jones helped lead the Green Dragons to the 1944 state prep title. He was all-stater in football, basketball and baseball. More on this developing story will appear in next week’s Harlan Enterprise.

Jones graduated from Harlan in 1945 and went on to play for the University of Kentucky. Jones scored 2,311 points in high school career at HHS and tallied 1,511 points at Kentucky, which included Adolph Rupp’s first two NCAA championships in 1948 and 1949.

At 6 feet 4 inches and 220 pounds, Jones played power forward for a Kentucky Wildcats team that won the National Invitation Tournament in 1946 and was runner-up the next year. The Wildcats won the N.C.A.A. tournament in 1948 and 1949. During his four years at Kentucky, the basketball team had a combined record of 130-10 and won the SEC championship every year.

Jones was a member of the 1948 Olympic Gold medal winning team with Rupp’s “Fabulous Five” and the Phillips 66ers.

Jones also played for legendary football coach Bear Bryant during his tenure at Kentucky. According to the New York Times, a Bryant story Jones told concerned the time he was on the sidelines spitting blood after many of his teeth had been knocked loose. Coach Bryant put his arm around the player and ordered him back into the fray.

Bryant was undeterred. “You don’t run on your teeth!” he said. “Get in there!”

According to the New York Times, Jones was often asked to compare Rupp and Bryant, and his standard answer was, “I got along with them, because I did what I was supposed to do.”

In 1953, Jones was elected the sheriff of Fayette County, Kentucky. In 1956, Jones was the Republican nominee for Kentucky’s 6th congressional district seat in the United States House of Representatives. Though Dwight Eisenhower, heading the Republican ticket, carried the state, Jones lost the election to Democrat John C. Watts.

In 1978, Jones started a charter bus company called “Blue Grass Tours” that was contracted to the UK Athletics department.
Jones was born on July 14, 1926, in Harlan, Ky., where his father ran a restaurant until his mother took over after their divorce, according to the New York Times. He remembered climbing a mountain to get radio transmissions of Kentucky basketball games.

As a boy, he put sodas on ice and sold them at the courthouse. In college, he had desk blotters made with Kentucky football and basketball schedules. He profited by selling advertising.

According to one official with Harlan Independent Schools, a girls basketball banner could be the next banner to appear in the “Wah Wah” Jones Gymnasium.