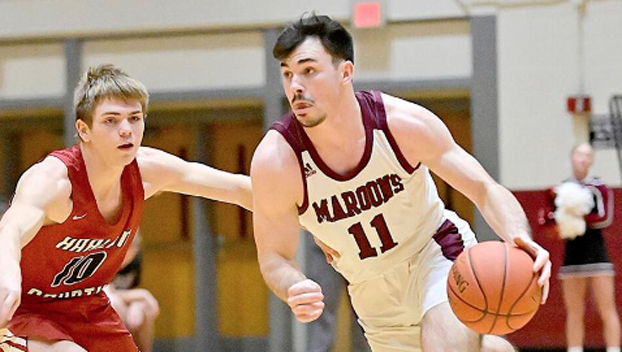 Pulaski County guard Zach Travis was guarded by Harlan County's Jonah Swanner in Tuesday's game. The Maroons improved to 22-0 on the season following a 69-65 win over the Bears.

SOMERSET — Coach John Fraley and his Maroons is the only team in the state without a loss this year.

Pulaski County improved to 22-0 following a hard-fought battle with Harlan County, 69-65 on Tuesday.

“Harlan County is a very good basketball team and coach (Michael) Jones does a great job,” said Fraley. “(Trent) Noah is a really nice player, and I thought Zach (Travis) and all of us — it was a team effort — everybody out there did a really good job of helping Zach on him,” Fraley added. “This was a regional tournament-type of game.”

Pulaski County will host the Rockets of Rockcastle County in a girls-boys doubleheader on Friday.

Harlan County (16-7) was scheduled to travel to Breathitt County on Thursday. The Bears will play at Lexington Lafayette on Saturday in the Jock Sutherland Classic against West Jessamine.

HC will return to district play on Tuesday at Harlan and Friday at Middlesboro.

Harlan County will close the final regular week of the season with home games against Williamsburg (Feb. 15) and Red Bird (Feb. 17).