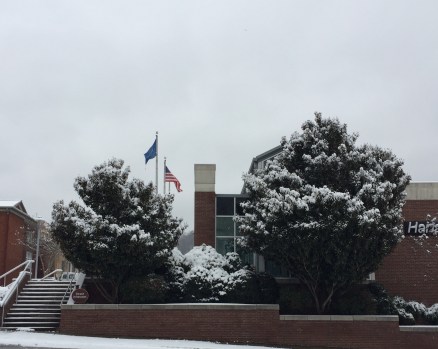 Snow covered the downtown area including the Harlan Center on Monday. (Photo by Joe Asher) 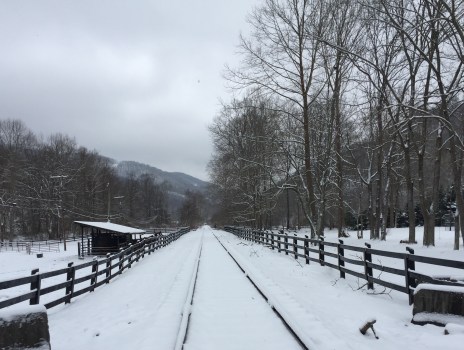 The old railroad tracks at Catrons Creek provided a scenic view of the snow that fell across the county on Sunday and Monday. (Photo by Joe Asher)

On a day like today when the world is blanketed in a pure layer of frozen whiteness, I am thankful for snow.

Studioknow.com lists 47 Eskimo words for snow and their meanings.

I’m sure there are others. I dare say all the different kinds of snow can be beautiful as long as you don’t have to get stuck out in it.

Growing up not far from Lake Michigan, the wind blew constantly. The tiny pellets of snow would sting the skin like little needles. We seldom saw snow falling and drifting straight down. There was usually wind involved and it came in at an angle.

We also got a lot of snow in the winter months. The ground might stay covered from October through April in a bad year. We were in the area that got “lake effect” snow. Snow days were almost non-existent. There were community schools in walking distance of most students, and few buses carrying children to school until we reached high school and attended consolidated schools much further from home.

I loved sledding as a child. We had sleds and the long wooden toboggans that curled up on the front end to ride through the snow. It was so much fun! I’ve also been for a snow ride on innertubes, trash can lids, thick plastic trash bags, and even the back of my coat with my knees up in the air. I’ve also heard of using a cafeteria tray. Every method was fun.

My brother reminded me that one of his favorite snow activities was to play “King of the Mountain.” In parking lots where there were giant mounds of snow left from the machinery that scraped the parking lots, children took full advantage. Who ever could make it to the top of the pile was king of the mountain. That also included pulling your opponents back down by their pant legs or any other way to keep them from reaching the top!
I loved making snow angels.

Another one of my favorite things to do was build a snow fort. We’d take an old shoe box, pack it with snow, and turn the rectangle of snow out on the ground like a brick. When the whole neighborhood of kids worked together, or the whole family, a snow fort could go up quickly. Sometimes we only made a short wall to hide behind as protection from the other team in a snowball fight.
Snow sculptures are also a lot of fun to make. My favorite is a dragon or a snow beast. Lots of snow didn’t need much inspiration to get creative. We would also stomp out messages in the snow with our boots, like our names, or a heart.

These days I enjoy taking photos of snow.

My recommendation when snow comes is to dress in layers, keep dry warm feet, wear an extra pair of gloves or a pair of socks over top of the gloves. A turtleneck or a neck scarf is always a good idea and a toboggan or hood for the head to keep body heat in.
My best advice is to enjoy the snow as much as possible, but never ever eat yellow snow!

Contributor Judith Victoria Hensley wrote this for the Harlan Enterprise.