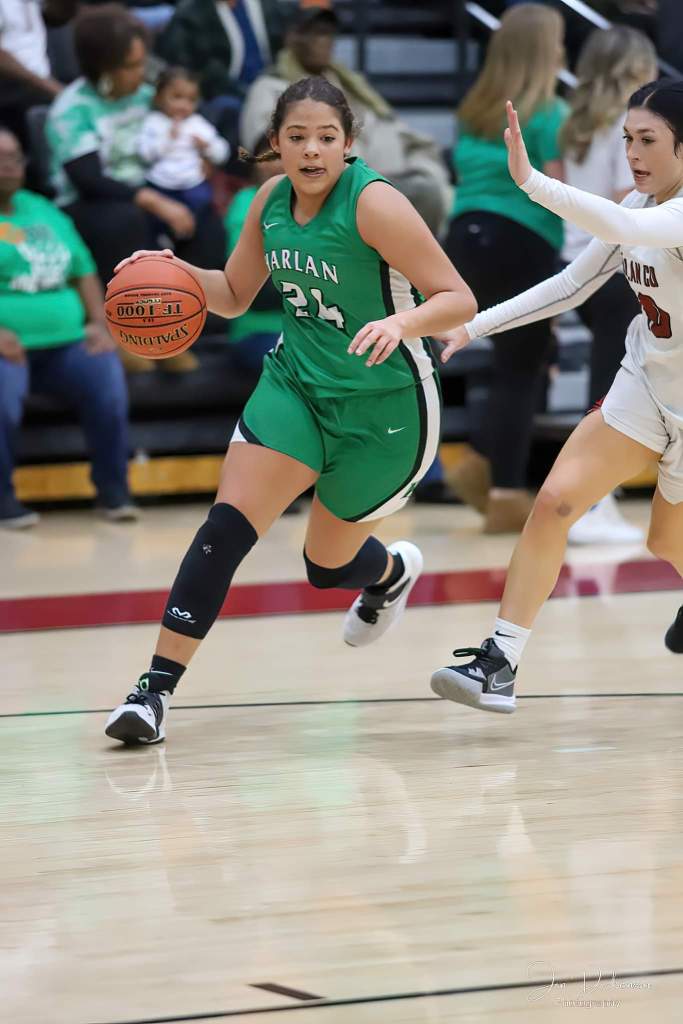 Harlan freshman guard Aymanni Wynn was guarded by Jaylin Smith of Harlan County on Saturday. Wynn finished with 15 points. Smith powered the Lady Bears with 21 points in the 73-62 win over the Lady Dragons. (Photo by Jon Dickenson)

Harlan County jumped out to an early lead and rolled to an 89-69 win over visiting Bell County last week in 52nd District action.

The Black Bears got nine points from Trent Noah in the opening period as HC led 20-9 after one quarter. Maddox Huff scored five in the first eight minutes of play.

“We didn’t play very well and Harlan County did. I thought this game was lost in the first three or four minutes,” Bell County coach Brad Sizemore said. “We started out the game one of six at the free-throw line and had a bunch of silly turnovers. We got behind and had to start gambling. They shot it well and beat us to a lot of loose balls. We seemed to be flat and didn’t have a lot of energy defensively.”

Noah, which finished the night with 26 points and 10 rebounds for Harlan County, also received 26 points from sophomore guard Jonah Swanner.

Swanner scored 10 points in the second quarter and Huff tossed in eight as HC took a 46-26 halftime advantage. Cameron Burnett tossed in 12 first-half points for the Bobcats.
Swanner had eight points in the third period. Harlan County’s Jackson Huff, along with Noah, tossed in seven apiece in the quarter.

Bell County outscored the Bears 26-21 in the final quarter as senior guard Dalton Stepp tallied 10 of his 23 points in the period. Burnett added seven points and Noah Brock had a pair of 3-pointers in the quarter.

“We wanted to set the tone offensively and defensively, and I thought we did. We were aggressive out of our trap and did a good job on (Cameron) Burnett in the first half,” said Harlan County coach Michael Jones.

Burnett, a senior forward, finished the night with 26 points, including 12 field goals. Brock, a freshman guard, knocked down three 3’s for nine points.

Harlan County improved to 11-3 overall and 1-1 in district action.

Neither Bell or Harlan County has yet to play Middlesboro or Harlan.

The Black Bears will play host to the 12-5 Green Dragons on Saturday.

Harlan County will remain home next week, hosting Middlesboro on Tuesday, Letcher Central on Thursday, Madison Souther on Friday and Cordia on Saturday.

The Bobcats will visit Corbin on Friday. Bell County is slated to play three games next week beginning Tuesday at home against Harlan in a girls/boys doubleheader.

Bell High will travel to Middlesboro on Friday (doubleheader) before returning home to battle Estill County on Saturday.

The Bobcats claimed a 50-44 win over Harlan County in freshman action earlier this week at Bell County.

Goodin and Cooper Miracle each had two points.

Harlan County posted a 48-33 victory over the Bobcats in a junior varsity game.