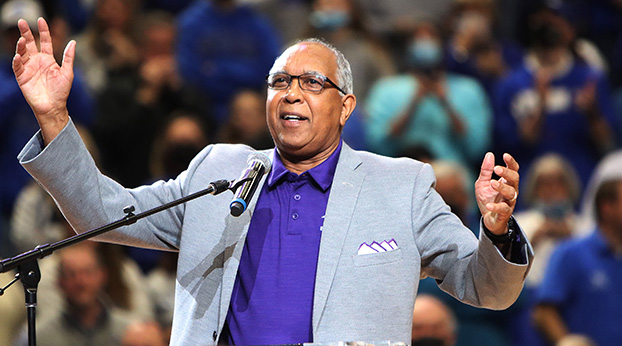 High Point Panthers head coach Tubby Smith, a former Kentucky head coach, was honored with a jersey retirement prior to Saturday’s game between the Wildcats and High Point in Rupp Arena. - Photo by Jeff Moreland

Tubby Smith not only won a national championship at Kentucky, but he also touched a lot of people in various ways that they have always remembered.

“When dropping Erik off at the Wildcat Lodge, I cried like a baby and I didn’t want to leave him. Tubby gave me the biggest hug and assured me that he was going to be okay, and he was,” said Carmen Daniels.

Her son, Erik Daniels, scored 1,045 points in his four years at UK and was a first-team all-Southeastern Conference selection as a senior in 2004. She wanted to be at Rupp Arena last Saturday when UK retired a jersey in Smith’s honor because of the impact Smith had on her son but a family obligation kept her away.

“He was a major factor on Erik. He reinforced that you have to be responsible for your actions. He was there when we got the call for him to play for Sacramento (in the NBA) and to go overseas (to play professionally),” Carmen Daniels said.

“Most importantly, he congratulated him on finishing what he started and getting his degree. It was awesome to have another black male in his life that had accomplished so much. He understood that family is so important and always made us feel a part of the Wildcat family.”

Her family has kept in touch with Smith since her son’s graduation and watched him coach Minnesota at Ohio State where she was attending school and then again when he brought Memphis to Cincinnati, her hometown.

“After hearing so much about the history of Rupp Arena I am glad to see that Tubby will have a jersey in the rafters. It gives me hope that this crazy world we live in might get it right one day,” Daniels said. “This was his season and the timing is right for the recognition.”

Centre College men’s basketball coach Greg Mason met Smith several times. He remembers being at the 2003 Final Four in New Orleans and saw Smith late at night on his way back to his hotel.

“Tubby had a bunch of kids out in the street showing them how to run (basketball) plays. He was really coaching and instructing. It was just him and the kids there a few blocks off Bourbon Street playing basketball,” Mason said.

County music singer J.D. Shelburne of Taylorsville was a student at UK when Smith was head coach at Kentucky. Shelburne played high school basketball and often a former high school teammate came to UK to visit. They would always play pickup basketball games during the visit.

“One day we went to Memorial Coliseum and the doors were open. The gym was dark, but we went in,” Shelburne said. “They (UK) had just finished practice. We went out on the court and shot. We were hitting everything we shot. Nobody came to kick us out.”

Eventually, the lights in the area behind the basket where UK had a weight room came on. Shelburne said players Chuck Hayes and Keith Bogans were watching along with other teammates. So was Smith.

“Tubby came out and rebounded for us for about 20 or 30 minutes. He talked to us and never kicked us out. We stayed another hour. That was the first time I met him and he was as nice as he could be,” Shelburne said.

That was almost 20 years ago and Shelburne, who now lives in Mt. Juliet, Tenn., remembers it like it was yesterday.

“I was so nervous. Tubby was king of Kentucky,” Shelburne, an avid UK fan, said. “He was the biggest thing in Kentucky and he was rebounding and talking to us. I will never forget that story.”

Joe Dicker has the same type of memory from his encounter with Smith. Dicker worked UK summer football camps for years when he was the head coach at Elizabethtown High School and one morning some camp coaches were eating breakfast in the Commons Area of Kirwan Tower on the UK campus.

“There was nobody but us in there eating when (then UK basketball) coach (Rick) Pitino came in and told us we had to move because we were sitting in the basketball area. We asked if players were coming in and Pitino said no but we were in their area. So we got up and moved a few tables over,” Dicker said.

The next year would have been Smith’s first as UK’s head coach. The football camp coaches were not sitting in the “basketball area” when Smith came in one morning and actually asked if he could join them.

“We laughed and told coach Smith that this wasn’t the basketball area but he was welcome to join us. We told him the story from last year. He just laughed and said he didn’t know the basketball players had their own area,” Dicker said.

“We had breakfast with coach Smith for the next two weeks. He had some great stories and we asked him a ton of questions. He was a true gentleman.”

He was and that’s part of why over 20,000 UK fans gave him numerous standing ovations at Rupp Arena last week when his jersey was retired.