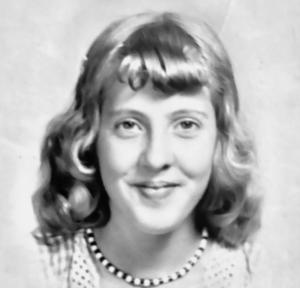 Eunice Thompson Halcomb, eighty years of age, passed away Saturday, December 18, 2021, at the Harlan Appalachian Regional Hospital. Eunice was born in Clay County, Kentucky, on December 19, 1940, to Bob and Ina Wagers Thompson. While working at Carter’s Restaurant in Ohio, she met, fell in love with, and married a young man by the name of Edgar Halcomb, who also worked at Carter’s. Eunice and Edgar were married on April 20, 1963, and were together for almost 35 years, until the time of his death in 1998.
Eunice was the very first female bus driver in Letcher County, KY, where she was also a substitute teacher. She would later hold positions at the IGA grocery store and Roses, where she was a department manager. Eunice loved flowers, gardening, and animals. She was especially fond of the hummingbirds, which came to visit her feeders each summer. She was a cancer survivor, an independent, hard-working lady, who was very private. Eunice was a huge University of Kentucky sports fan and she taught her three children to love the colors blue and white. While Eunice loved animals, she loved none better than her baby, Shadow, her cat. She was a baptized believer in Jesus Christ and was a member of Dione Baptist Missionary Church.
Eunice is preceded in death by her parents, Edgar and Ina; as well as five siblings, Janet Parman, Kathleen Burns, Charles Thompson, R.J. Thompson, and Gillis Thompson.
She leaves behind to cherish her memory her three children, Deronda Garland and husband, Chuck, of Cumberland, KY, Keith Halcomb and wife, Carol, of Poughkeepsie, NY, and Vanessa O’Donnell and husband, Bill, of Beaufort, SC; two sisters, Judy Baker, of London, KY, Phyllis Portwood, Corbin, KY; seven grandchildren, Jared Garland, Haley Rice, Tyler Dixon, Shane Dixon, Chase O’Donnell, Chad Halson, Ryan Halson; one great-grandchild, Van Dixon; as well as a host of extended family and dear friends.
The Halcomb family would like to extend deep gratitude to the Harlan County Senior Citizens Center and specifically, Claude, who delivered Eunice’s meals every day. What a blessing Claude was to Eunice and her family.
A graveside service for Eunice will be held Tuesday, December 21, 2021, at the Monte Vista Cemetery, Cumberland, Kentucky, at 2:30PM, with the Reverend Mitch Huff officiating. Family and friends will serve as pallbearers.
In lieu of flowers, the family requests that donations be made to the Harlan County Senior Citizens Center.
Tri City Funeral Home is honored to serve the Halcomb family.