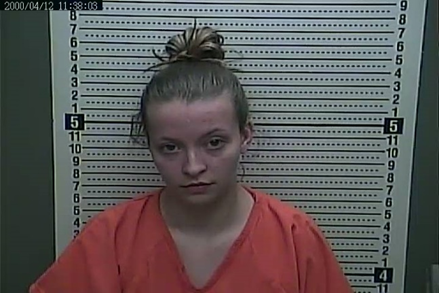 A Harlan woman is facing charges including trafficking methamphetamine after allegedly hiding from police attempting to serve warrants at a residence.

According to the citation, Harlan County Sheriff’s Deputies arrived at a residence at approximately 8 p.m. on Saturday in order to serve active warrants on multiple residents. Upon arrival, deputies knocked on every door of the residence multiple times and identified themselves. The deputies heard movement inside the house for several minutes while they continued to knock and announce. Deputies then entered the residence through the back door. Upon entry, police made contact with Asher, James Starret and Jarrett Thompson. All three individuals had active warrants and were placed under arrest. All three individuals were found in different rooms of the residence.

The citation states upon entering the room Asher was hiding in, police noticed multiple pills, drug paraphernalia and an unknown powdery white substance in a bottle cap on a shelf in plain view.

Asher was also served with a complaint warrant. The warrant states on Nov. 8, 2020, Asher sold a bag of methamphetamine to a confidential informant.

Asher, Starrett and Thompson were lodged in the Harlan County Detention Center.

* Sedric Hall, 36, of Detroit, MI, was arrested on Saturday by Loyall City Police Officer Napier. Hall was charged with possession of a handgun by convicted felon, possession of marijuana, resisting arrest, menacing, first-degree possession of a controlled substance, first-degree unlawful imprisonment, failure to or improper signal, rear license not illuminated, and failure to wear seat belt. He was lodged in the Harlan County Detention Center;

* Nora Helton, 47, of Harlan, was arrested by Napier on Dec. 7. She was charged with fraudulent use of a credit card under $10,000, theft-receipt of stolen credit/debit card, persistent felony offender and first-degree possession of a controlled substance. Helton was lodged in the Harlan County Detention Center;

* Summer Tolliver, 28, of Evarts, was arrested on Dec. 6 by Harlan County Sheriff’s Deputy Matt Cope. She was charged with first-degree possession of a controlled substance and possession of marijuana. Tolliver was lodged in the Harlan County Detention Center;

* Shawn Carroll, 34, of Evarts, was arrested by Napier on Dec. 5. He was charged with tampering with physical evidence, prescription controlled substance not in proper container, theft of a legend drug, illegal possession of a legend drug, violation of conditions of release, public intoxication by a controlled substance (excludes alcohol) and third-degree criminal trespassing. Carroll was lodged in the Harlan County Detention Center.