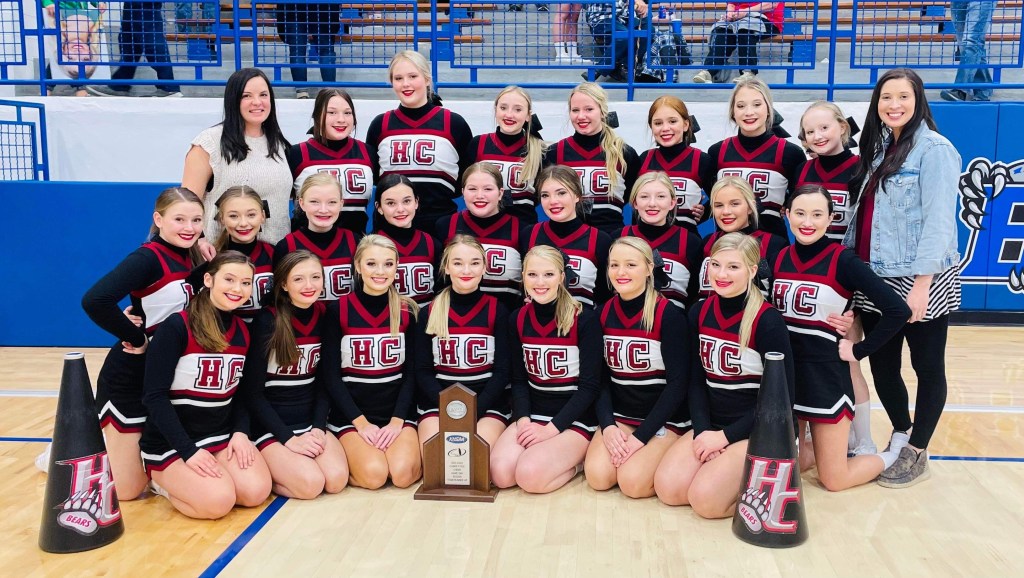 “The UCA Bluegrass competition was able to boost their confidence and provide them with some insight on what they needed to work on to be able to capture a win at the upcoming KHSAA Regional Competition for advancement to state,” said Harlan Cheer Coach Stephanie Marsee.

The varsity cheerleading squad competed in the KHSAA Game Day Division in Breathitt County on Nov. 20 where they placed as first runners up (second to Knox Central) against eight other teams in the region, including district rivals Bell County and Middlesboro. They were able to earn a bid to the state competition.

Friday (Dec. 10), the team competed at the KHSAA Competitive Cheer Championship at George Rogers Clark High School in Winchester.
“This was a great experience for them as a group as they had never competed at that level,” Marsee said.

The cheerleaders were able to pull off a solid performace atop nerves and landed 16th out of 32 of the best Game Day teams from around the State.

“They had some hiccups in their performance, but that was expected with it being thier first year competing in a competition this large,” Marsee said. “This team has 24 members with 16 of them being made up of freshmans and sophmores. However, overall they performed a solid and exciting routine. Overall, we are proud of this group for being ale to make it to the State competition as that is a huge achivevemnt in itself.”

Marsee said the Black Bears’ cheer team will be able to utilize these experiences to get back in the gym and prepare for basketball perfromances and the in-game district competition that will be held in late Feburary-March.

“We have recieved several invitations for competing in showcases and other competitions around the state, but we haven’t commited to anything yet,” she said. “We want to ensure that we are ready to fully support our boys’ and girls’ basketball teams during thier season before we commit.”

Marsee praised the young cheer squad that she predicts will grow stronger as time goes by.

“What I can say is that the Harlan County cheerleaders have the administrative support, the expereinces, and upcoming talent from a large freshman and sophmore group to continue on this path in the years to come,” she said. “We look forward to seeing thier accomplishments in the future!”

“Harlan will be saying goodbye to six senior leaders this season, but they will be ending on a good note with some accomplishmnts and memories to carry with them,” she said.